How does Emissary of Grudges work exactly? 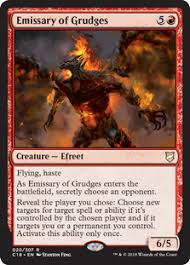 I have Emissary of Grudges in my deck and I was wondering if I use it correctly. In exemple:

I play Emissary of Grudges and I secretly choose player 2.

Player 2's turn. He casts Clone and targets me with its ability:

First question: Can I use Emissary of Grudges's ability as an instant?

If so, can I "cancel" Clone's ability, and use it myself on anyone?

In example, could I choose to target Player 3? Or am I forced to use it on its owner?

Last question: if Emissary of Grudges leaves the battlefield, do I keep this ability? Or do I just throw out the chosen player's name?

Can I use Emissary of Grudges's ability as an instant?

Yes, otherwise it wouldn't make sense. A spell or ability is something on the stack.

can I "cancel" Clone's ability, and use it myself on anyone?

Nope. Clone's ability doesn't target; the word 'target' has a very specific meaning in Magic and is almost always printed on the card, in the rules text or the reminder text. A similar card which does target is Rite of Replication, which does not target you but it might target a permanent you control. If it does, you can choose another target for that spell, but it must be a creature (for example, a Grizzly Bears; it doesn't matter who owns it) and the controller of the spell doesn't change. The cloned Bears will still be controlled by player 2.

if Emissary of Grudges leaves the battlefield, do I keep this ability? Or do I just throw out the chosen player's name?

You don't need to reveal it, you can just throw the paper you wrote it on away. If it enters the battlefield again, you can choose a new player.

Not the answer you're looking for? Browse other questions tagged magic-the-gathering mtg-commander mtg-multiplayer or ask your own question.

14
Which spells or abilities are affected by things that care about targeting?

1
Can I use Plaxcaster Frogling to temporarily shut off Species Gorger's ability?
2
Does Aligned Hedron Network exile creatures that enter after it does?
4
Will state triggers cause a draw if their condition is always true?
11
What decides whether a card is exiled or returned as a player loses?
11
What rules explain Xantcha's behavior when its controller leaves the game?
3
Does Sylvok Lifestaff work with Bronze Bombshell?
4
Emissary of Grudges vs. Annihilator
3
Stealing Emissary of Grudges