What are on each of the faces of the dice in the US version of Yu-Gi-Oh! Dungeon Dice Monsters?

Yu-Gi-Oh! Dungeon Dice Monsters was a spinoff of the popular trading card game, which used the same iconic monsters, but instead was a tactical miniatures game featuring dice. The Japanese versions and the American version differed in the dice that were offered:

What are on each of the faces of the different dice?

I found this Dungeon Dice Monsters page on the Wiki. There, it is specified each of the possible symbols and their meaning. The specific term used in the game is 'Crest', and you roll the dice to gather specific kinds of Crests to interact with the game.

Edit: I also found the official ruling in case it helps as reference.

Worth mentioning that there are 4 kinds of dice, one for each possible monster level (1-4). Each dice has faces depending on the level they are (usually, the higher the level the less Summon Crests on the dice).

To summarize it here, the possible Crests are:

Regarding the content of the dice faces. On this wiki page we have, emphasis mine:

No matter what version is played, the amount of summon crests is the same for all dice across a given level. Level 1 dice have four summon crests per die, Level 2 have three, Level 3 have two, and Level 4 have one. They all have other crests on the remaining sides.

Here is an image taken from the linked ruling booklet that specifies what is the content of each face of each dice level: 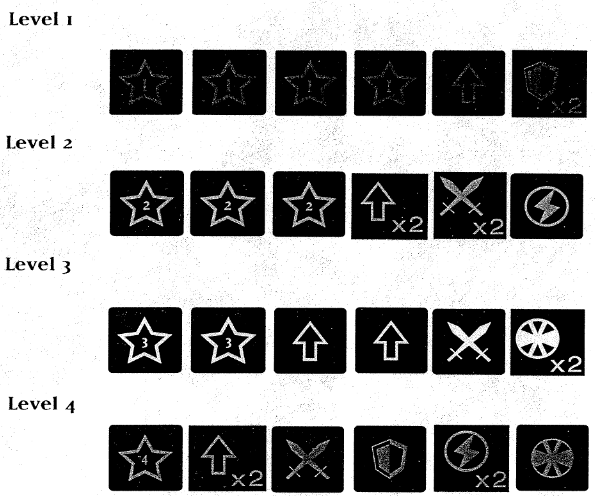 Not the answer you're looking for? Browse other questions tagged yu-gi-oh-dungeon-dice-monsters or ask your own question.