What is this Old French Game board with 10x10 squares and dark and light circular pieces?

I have this old 10x10 wooden game board with dark (black) and light (brown) circular pieces for a long time and am trying to find out a little bit about it.

The entire board with storage is approximately 14 X 17 3/4 inches. There are 18 white and 20 black pieces about 1 1/4 in diameter. The slide covers are marked 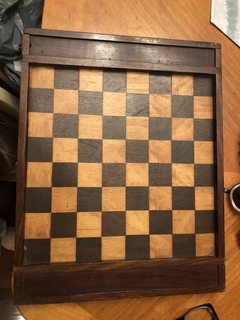 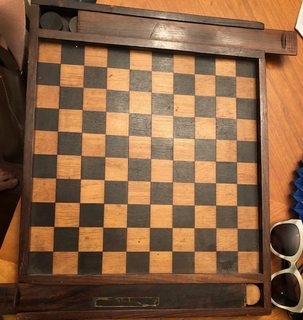 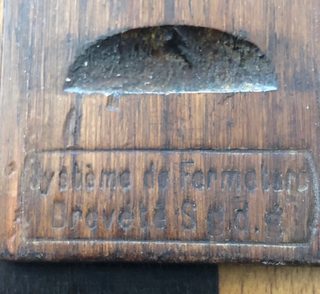 That appears to be a relatively nice double sided International draughts/Checkers board.

Without any further identifying information, it could have been produced anytime in the last 1-200 years, but based on its appearance, I'd estimate it was manufactured around the 1940s-1950s.

The markings indicate the board has a Breveté SGDG, which is a French patent, the Breveté SGDG system started in 1844 and ended in 1968, so that narrows the age down to a 120 year window.

3
Name of empire building game with negotiated alliances?
2
Recent semi co-op maze game designed to be played blind
6
What's this circular board with a spider in the middle
4
Game based on old phone 'Snake' Game
6
Please identify this game - 4x4 diagonal squares, 4 red and 4 blue pieces - nice wooden board
12
Vintage Monopoly Game: What Year is it?
7
What is this game involving white disks, fish, and wavy pieces?
4
Can you identify this John Conway board game?
3
Identification: moving and stacking black and white pieces, packed in a tube