I remember a game my grandparents had, but I have never found it searching on the web.

It had a green board that was injection molded plastic, it had a set of plastic castle towers and a cardboard castle wall as a divider. The top of the main board was a grid of holes, underneath the holes were interconnected by a network ducts.

The pieces were little soldier-shaped plugs that fit in the holes. It also had two colored air plungers.

The game mechanic was a bit of a cross between checkers and Battleship. You moved a piece and were allowed to plunge a hole as turn elements. If you plunged a hole on your side and the adjoined hole on the opponents' side had a piece in it, it would fly out and be removed from play.

Has anyone heard of or played this game?

I think you might mean Battleboard. I found it typing "air plungers board game castle" into google image search

According to information on BGG it was from 1972. It is a two player game.

The photos fit your description of being green with a castle.

Each player has four knight pieces and one king piece. At the beginning of the game they are placed in the row furthest from the dividing wall. Players take turns moving one of their pieces one space (orthogonally). They then get to use their "air catapult" to try to pop out one of their opponent's pieces. This is done by placing their plunger in one of the vacant spaces on their side of the board and then banging it. If their opponent has a piece in that corresponding space, it will pop up into the air. Pieces captured in this way remain out of the game until that player moves his king up to the dividing wall, at which point he can claim a captured knight piece back (but also tips off his opponent that his king is in the front row). The first player to move two pieces into the front row (next to the dividing wall) wins the game. 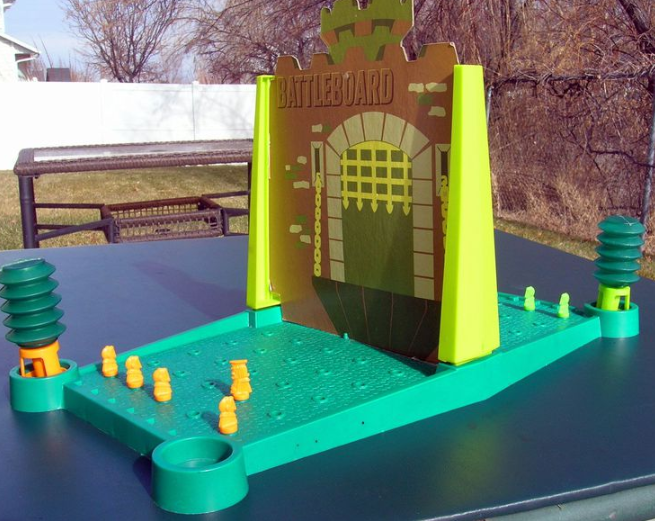 15
Identify Strategy Game with Chariots and Elephants
3
What is the memory-style game that has pawn-like tokens covering pictures?
3
Identify board game played as a child featuring cute monsters
5
A board game with astronauts?
12
Adventure board game I had as a kid
14
Does anyone recognize this monster family board game?
4
Early to mid 70's 2-player maze race game - What was the name?
9
Help me identify a game with a large orange hooter/squeaker in the middle
1
What was the game with a plastic Bigfoot that left footprint counters?