What spells can be countered? 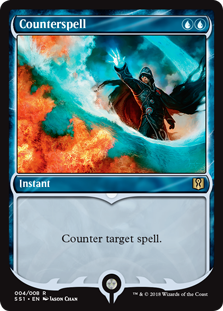 Does this mean it can counter anything? If so, what other counter spells are there?

It can counter almost anything. Notable exceptions are lands (they are played, not cast) and abilities (you'll need something else, like Stifle, to counter those).

112.1. A spell is a card on the stack. As the first step of being cast (see rule 601, “Casting Spells”), the card becomes a spell and is moved to the top of the stack from the zone it was in, which is usually its owner’s hand. (See rule 405, “Stack.”) A spell remains on the stack as a spell until it resolves (see rule 608, “Resolving Spells and Abilities”), is countered (see rule 701.5), or otherwise leaves the stack. For more information, see section 6, “Spells, Abilities, and Effects.”

305.1. A player who has priority may play a land card from their hand during a main phase of their turn when the stack is empty. Playing a land is a special action; it doesn’t use the stack (see rule 116). Rather, the player simply puts the land onto the battlefield. Since the land doesn’t go on the stack, it is never a spell, and players can’t respond to it with instants or activated abilities.

Some spells can't be countered because they say so on their card (like Akroma, Angel of Fury). Sometimes, the rules make it very difficult to do so (like Krosan Grip – its Split Second ability ensures you can't cast Counterspell or similar spells, but triggered abilities like the ones found on Counterbalance or Kira, Great Glass-Spinner can, under certain circumstances, still counter them).

There are many other counterspells out there; you can find most of them via a Gatherer search.

This can counter any spell; a spell is an object on the stack that has been cast but has not yet resolved.

This means that it could counter a creature, sorcery, instant, planeswalker, enchantment, or artifact spell; which are all the types of things that can be cast as a spell.

Note that playing a land does not count as casting a spell, so it cannot counter that. Lands never go on the stack and are instead put straight onto the battlefield.

Also abilities are not spells, so it could not counter an activated or triggered ability.

As you can see, cards will state specifically what they can target with the description of an object after the word "target". Counterspell works on any "spell".

Notably, a spell is always something that is on the stack; you cannot use Counterspell, or anything like it, to do anything about a creature that is already on the battlefield.

First, spells are cards that have been cast but not yet resolved, every card in the game that is not land will be a spell at some point - instants, sorceries, creatures, artifacts, enchantments and planeswalkers. A spell like counterspell can counter any of these unless something else prevents it from countering that spell. There are other things that use the stack, abilities of cards, these can be countered, but not by this spell.

Cards like Abrupt Decay specifically say they can't be countered, and some cards will grant this ability to other things, like Gaea's Herald or Boseiju, Who Shelters All. Cards with split second, like Extirpate, can be countered, but are hard to counter since spells can't be cast once it has been cast until it resolves.

There are over 300 spells in magic that are used to counter, and most of them are blue spells. I won't list them all but some examples:

7
Has Counterspell always been able to target any spell on the stack?

5
How exactly does Xenograft work, and not work?
8
Can extort be triggered for countered spells?
1
Is a 'Can't be countered' ability the same as 'protection From' or 'Can't be targeted?'
3
What can be played during an opponents turn?
3
What does “cannot be countered” mean in MTG?
8
How can a Morph ability counter split second spells?
3
Can I play countered sorcery speed spells with Guile?
1
What does it mean that only permanents are legal targets for spells or abilities?
10
Split Second or Can not Be Countered
6
Change in “can't be countered” wording