I know that a station can only be used to serve as a connection over another player's route between the station-city and another city.

The rules are a bit unclear, but my understanding is that the same route must be used for all of your destination ticket.

Each station allows you to claim a single route.

That route may be used to fulfill more than one destination ticket, but every ticket must use the same route.

For example, say you had the following three destination tickets:

With a station at Berlin, you could complete either the first two destination tickets or the third, but not all three (unless you also had a station at Essen or Frankfurt). 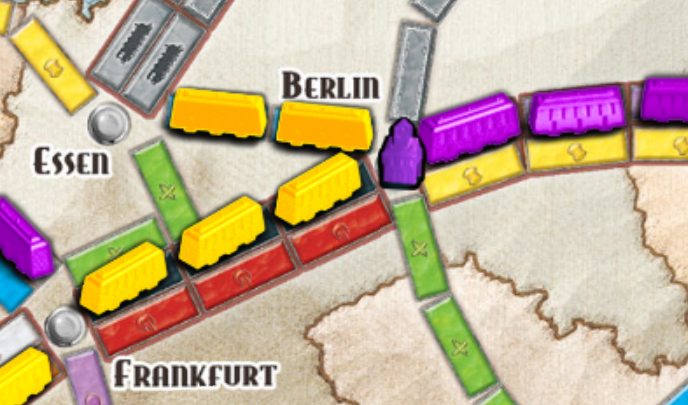 The design of the station minis helps calculate the final points. At the end of the game, move each of your stations from its city onto the route it is claiming (on top of the cars). Then that one route counts as yours for the purposes of completing tickets. You don't get to move the station again, so you can't claim multiple routes. (Credit to @Max for this tip.)

There is absolutely no problem in having two stations (or even two parts of route) in common.

The only thing that is needed to claim a ticket is that the two stations are connected via a path of trains of your color.

The train station permits to use one opponent route to be counted as a route of yours. Once it is yours, you can use it for all of your tickets.

19
The Proper use of Stations in Ticket to Ride Europe