When do you enter the Mighty Mech?

In Tiny Epic Mechs when you enter the zone with the power mech, it says you "immediately take control of it". I was wondering where this falls in relation to other things that happen immediately. Specifically, mines, power up and attacking other players.

The order of actions I know are:

Where should entering the mighty mech fall into this? 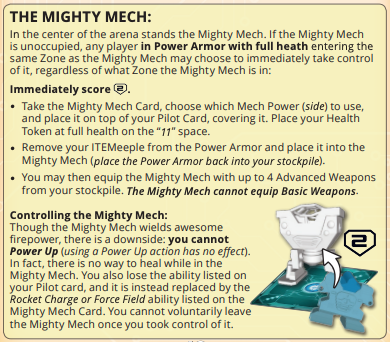 The general consensus in BGG is that entering the Mighty Mech is the first thing to do when entering a square, before any other action or check. So if otherwise allowed you could first enter inside the MM and then check for mines, combat, actions, etc.

But I could not find a written rule or clarification on the web.

6
Sunrise vs. “Summon Eclipse” in Buffy the Vampire Slayer
2
Do you get to draw a card if you rotate a tile?
4
Who wins when the Inquisitor kills somebody in Blood Bound?
7
In “Prophecy”, when going onto a space that has a villain on it, are you required to fight it?
1
Do you need to be in the same region to attack Collossus?
2
How does Zap work in “Chameleon the game”?
2
Where does the shark send the divers?