How to bid a slam when partnership cannot find the best suit?

The following hand was dealt recently in the Common Game; but only a very small number of partnerships bid and made a slam (1 grand; 2 small slams). 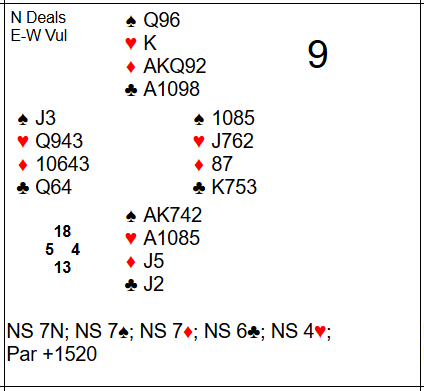 As you can see from the last 2 lines, the computer predicts that 4 different slam contacts are make-able. Would you please let me know if you can see the best way of bidding to reach a slam contract.

Playing 2-over-1 with a few conventions (including the serious 3nt), my auction would be something like

Now north has a couple of options. They can count 6 tricks outside of spades, with a possibility of two more in diamonds. This makes me think that we should be in spades, not no trump. That virtually guarantees a fourth diamond. To make grand, we'll need six trump tricks. It doesn't seem too difficult to get there, so an aggressive north can bid 7s.

Let's talk capabilities first. In general, Grand Slam should not be bid unless one can identify all 13 tricks expected to be made.

If North is making the final 6/7 decision in Spades after a Blackwood auction then only 12 tricks can be counted unless the Diamond J is somehow located: 5 Spades; 3 high Diamonds; fifth diamond after one ruff; and A,A,K in Clubs and Hearts.

If South is making the final decision small slam is likewise the maximum. It is hard to conceive any auction enabling South to count tricks instead of relying on controls and an overall strength assessment of 32-43 combined points.

Now for a possible auction playing Two-Over-One-Game-Force, (assuming no interference from the weak and unshapely E-W hands):

* This cuebid sytle is one well worth discussing with partner:

Also, some partnerships reverse the meaning of North's 3 NT (to convey "just joking partner - I've lost interest." In that case North would call 4 Clubs instead to show continued interest, and the auction would continue as before.

Here's an auction that finds 7 Spades without being ridiculously aggressive:

** It is unclear to me that the North hand here is quite the right holding for a rebid of 3 Diamonds instead of 2 Clubs, most particularly because it both hides the Spade fit and should promise a good six card suit; but it certainly would work on this hand (with the right partnership agreements).

One possible agreement is to use them when Partner has, respectively:
- opened or simply bid;
- opened and rebid; or
- opened and jump rebid
the suit.

The South hand evaluates as about 14 points at the deal, and possibly upgrades to about 15 if North rebids Diamonds strongly:

The North hand evaluates to about 18-19 points as follows:

With a total combined strength of 32 at the deal, rising to 33-34 on the bidding and both an easily identified fit in Spades and a strong side suit in Diamonds, finding small slam at least should not be difficult.

In a strong club game or better I would expect at least half the field to find a small slam in either Spades or Notrump. With two good five card suits in 8 and 7 card fits respectively, plus all the aces and keycards in both suits and no interference, there seems no excuse to miss the slam unless one has poor partnership understandings. Even a dedicated Goren partnership with just 1430 RKC should find at least small slam in Spades or Notrump on either the same auction as (1) above or:

where [*] creates a game force.

Evan an egregious first rebid by North of 2 Clubs should still find a small slam after a 2 Heart (Fourth-Suit-Forcing (and artificial) rebid by South.

The auctions described above and in the answer by ruds all hinge on the first rebid by North, and its correct interpretation by South. There are three possibilities:

With my long-suffering partner we would get to 6S easily enough. A grand would be a not unreasonable gamble at best, and might be bid if we need a swing. But you see, a 41 spade split more or less dooms all grands. And if the fifth diamond and a heart ruff are needed to get to 13 tricks, a club lead will knock of the dearly needed late entry. We don't have the tools to diagnose the importance of DJ. Obviously that would be taken into account in those cases, where a swing is needed, but normally you only bid a grand when you can count 13 tricks.

Our bidding (approximate, I will actually show this hand to my partner if there are points of interest)

Three keycards in the South hand is great news. Still, entries for heart ruffs may be difficult to arrange. A diamond jack or king of clubs could do. A probe for a grand is justified, and my partner would probably do one. If my glass has been half empty all evening I might simply close shop at 6S, and apologize if a grand is cold. As others pointed out, longer spades in partner's hand improve the odds for the grand immensely. Then again, a heart ruff may not be needed. I guess a generic king ask/grand invitation is best, so

Just for fun, in the Precision version I play with one partner:


Also for fun, in KK Relay:

Maybe the 6D ask is too optimistic, since it means you might not be able to stop in 6S and 6N is riskier than 6S if partner has nothing, in which case the 5N ask is pointless (since North knows the answer they'll get). (Also, 6N makes the known hand declarer, so defenders will defend double dummy.)

(Also - note that all of South's bids starting with 5D are encrypted! As far as the agreements are concerned, it's possible that South has 4 or fewer controls in spades and hearts combined, in which case 5D shows one of AK of hearts and neither or both AK of diamonds, and 5S denies Q of spades, 6C denies Q of hearts, and so on. Of course both North and South knows which is the case, and it would take a very aware and daft North (or South, behind screens or online with self-alerts) to explain this ambiguity to the opponents!)

3
In "Standard" American, Is It Possible to Bid the Opposing Suit "Naturally" Over a Takeout Double?
3
Confused with Bidding in Contract Bridge
5
In bridge, what are exceptions to "third hand high?"
4
In bridge,should a responder devalue her hand if short in opener's suit?
1
Bridge: Matchpoints vs IMPs: Different game?
5
Do "flat" hands devalue a 4-4 trump fit?
0
How to make a small slam in bridge with less than 30 points between the partnership?
2
How to make a small slam in bridge with only 25 high card points between the partnership?
2
Are bidding systems geared toward "optimizing" contracts?
3
How to bid and make a slam with 28 HCP between the partnership?