Scope of "Finger of God"

In "Monty Python Fluxx" the wording on the "Finger of God" Keeper is a bit ambiguous. Can its special power be used on another player's cards? 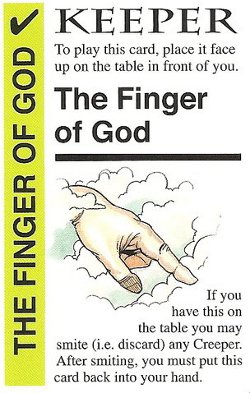 If you have this on the table you may smite (i.e. discard) any Creeper. After smiting, you must put this card back into your hand.

The Finger of God is a Keeper which, if in play in front of you, allows you to "smite (i.e. discard)" any Creeper, at the cost of returning Finger of God to your hand.

The question here is what "smite (i.e. discard)" can possibly mean. If you're technically-minded, "discarding" in Fluxx would seem to refer to the act of discarding a card from your hand. In this case, the use of Finger of God would be: when you draw a Creeper, instead of putting it directly into play, you have the alternative option of putting it into the discard pile (and presumably drawing another card as usual). Under this reading, it's very difficult to see how you could use the Finger on other players' cards.

Fluxx though isn't really a game that benefits from the players getting too technical about the rules, in my opinion. I'd suggest that "discarding a Creeper" should be interpreted as "move a Creeper card that's in play to the discard pile". This is much more satisfyingly SMITEY, after all. BOOM!

Can this divine smiteage be employed against the Creeper of another player? Well, as any God-fearing knight would be able to tell you, the good Lord our God Jehovah is omnipotent and as such can smite any evildoer He likes. If you want to argue that He is limited to targeting some Creepers and not others then ON YOUR OWN HEATHEN HEAD BE IT.

I would say "any creeper" would mean any player's creeper or it would say more precisely "any creeper you have in your hand or on the table" I would think.

Isn't it unlikely that you'd want to discard a creeper that someone else has though, as the creeper would potentially be stopping them from winning - so discarding it would open up the possibility of them winning? Unless it's a creeper that has global power to stop ANYBODY winning when it's in play?

7
Can I use the Finger of God on other players' turns?

10
Are drawing an extra card and playing an extra card optional when the Party Bonus rule is in effect?
23
Do I have to keep a creeper whenever I draw cards in Fluxx, even if I was drawing cards to give to other players for "Everybody Gets 1"?
5
What does it mean when the Animator "counts as" the Finger of God?
7
Can I use the Finger of God on other players' turns?
4
In Star Fluxx, have you needed to change how The Computer and The Unseen Force play?
3
What are the rules with attached creepers in Cthulhu Fluxx?
7
Fluxx - when is the winning condition reached?
5
Is Zap A Card considered stealing if a keeper was taken from another player?
3
Firefly Fluxx Upgraded Creepers