What is the use of the return label in Pokémon TCG?

If so, please tell me how. 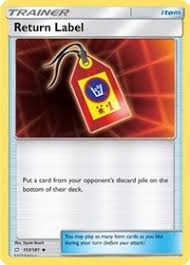 As ConMan mentioned, the value of the card is to prevent effects that happen in the Discard. Not only is Darkrai GX an excellent example of one such card, but if your opponent has various Trainer cards, attacks, or Abilities that can return cards from the Discard to their hand or field, then that's all the more reason to use it. Why? Because it's better for a card they want to be in their deck than in their hand.

The final reason is to plump the opponent's deck. Under normal circumstances, the opponent having 25 cards in deck or 26 cards with a specific card at the bottom of the deck won't change the odds of the 25 random cards. However, if an effect causes the opponent's deck to shuffle, you may have just weighed it down with one card that (by this point in the game) could be a dead card if they draw it, decreasing (ever so slightly) the odds of them getting the cards they need.

To be honest, it's not that powerful of a card. While it certainly has its uses, the opportunities to make quality use of it are so limited that you're looking at it coming into play maybe once in a blue moon. You're better off including cards that directly benefit your deck's winning image or to select a card that acts as a response to the decks that counter your deck. It should generally only see play if you have extra spots in your deck and you have nothing better to use OR if you know the META of the event you're going to will give you plenty of opportunity to make use of it effectively.

The main reason such a card would be added to your deck is to counter any opponent's abilities that rely on having certain cards in their discard pile. For example, Darkrai-GX has the ability "Restoration: Once during your turn (before your attack), if this Pokémon is in your discard pile, you may put it onto your Bench. Then, attach a [D] Energy card from your discard pile to this Pokémon.". By using Return Label, you prevent your opponent from bringing their Darkrai back.

It's definitely a niche card, and you have to assume that your opponent has such an ability, but if that's what the current meta is leaning towards then this is a possible counter.

8
Why are the old Pokémon TCG sets not allowed in modern tournaments?
3
Is there any complete downloadable Pokémon TCG text database?
2
Are the Pokémon TCG "Team Rocket" sets balanced against XY cards?
8
Has Ash ever appeared on any Pokémon TCG cards?
2
Can a Pokémon attack more than once per turn?
1
Why don't ground-types (fighting) in Pokemon TCG have resistance to electric?
4
How does the whole EX/GX thing work? (Pokemon TCG)
0
Pokémon attacks which deal no damage
0
Does Mewtwo-EX's Damage Change exchange or move damage counters?