Does damage of Echoed Voice (Toucannon SUM) increment each turn?

My brother and I were playing another round of Pokémon TCG, and we encountered an argument that we can't solve involving Toucannon's Echoed Voice attack.

Me: Echoed Voice does 60 damage on the first round, 60 + 60 on the second and 60 on the third. (The damage resets it's increment on the third round)

Who's right? I would like to find out as soon as possible! 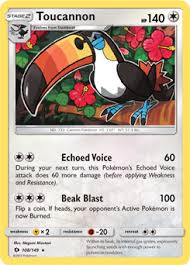 [CC] Echoed Voice 60 During your next turn, this Pokémon's Echoed Voice attack does 60 more damage (before applying Weakness and Resistance).

"does 60 more damage" adds damage to the base damage, 60 here. It basically checks if you used the attack last turn, if yes, bonus damage applies. There's no increment.

This follows official ruling from The Rules Compendium EX:

A. No, but it does mean that whenever you do Extra Comet Punch in consecutive turns you add +50 to the base damage of the attack. So on the first turn you would do 50, then second turn does 100 (Base 50 plus extra 50 from previous turn), then third turn does 100 (again, Base 50 plus extra 50 from previous turn), etc. But don't forget, benching or switching Metagross-EX ends this effect! (Jun 17, 2004 PUI Rules Team)

And also another official ruling from The Rulings Compendium LVX:

Q. If I use Silver Wind once, then I use it again on my next turn, it would do 60 damage (assuming there's no weakness or resistance, and that neither active Pokémon is switched out). On the third turn would it do +30 more damage (bringing it up to 90), and on the fourth 120 damage, and so on?

A. Sorry, but Silver Wind only adds 30 to the base damage done by the attack; it is not cumulative in the manner you suggest. (Jun 17, 2004 PUI Rules Team)

Joe pointed out in comment that there is also another official ruling in the latest version of compendium, The Rulings Compendium Black and White:

2
Why isn't resistance a case of halving any damage taken?
5
Is there a card similar to Lugia from Fates Collide that targets GXs instead of EXs?
0
Pokémon attacks which deal no damage
11
How can I defend against Pokémon Cinccino “Fluffy Tail”
4
Does Incineroar's ability, Strong Cheer, affect attacks that normally deal no damage?
0
Does Mewtwo-EX's Damage Change exchange or move damage counters?
1
Can Mewto and Mew Tag Team GX's Perfection ability be prevented from using by using Golduck's amnesia attack?