"Guilty!" is the name of this game I'm looking for?

I wanted to know if any kind of SE user is able to identify a certain board game, and to indicate if it exists, at least in its Anglo-Saxon version. It is an investigation board game, which according to the literal English translation of the title should be called -

since I have been told that there is a German version of this game titled: „Schuldig!“.

Obviously, it is not necessary that the exact title is this, and therefore it is good to give other indications to be able to identify this game, which has existed at least since the 1990s.

(however, for clarity, from now on if I have to call this game again during the question, I will call it as said, that is: "Guilty!", exclamation mark included)

In this 4-7 player game, very different from the famous (?) Cluedo or Orient Express -
which they have in common with "Guilty!" just having to deal with an investigation into a crime to be solved -
it is about taking part in a private investigation, but with some peculiarities.
A crime was committed, apparently without explanation. This crime is announced with a specific title, and with specific characters that are part of the story to be released.
But here's the first important difference from the other 2 games above:
- investigators have known since the beginning of the game the identity of the guilty of the crime! In other words, simulating the typical acumen of a Poirot, rather than Miss Marple, or Sherlock Holmes, anyway you like, each of the players already knows from the beginning which of the characters in the story killed the unfortunate victim.
The investigations in this game focus then not so much on the classic "whodunnit?", but rather on the mechanics of the crime - or the way in which a character was killed - and above all on motive - the reasons why a character made himself guilty of the crime in question.
To play this game you need a "Master": in other words, one of the players personifies the guilty party. He opens the sealed card of one of the cases to be solved, which contains the plot of the case and all the indications for its resolution, including all the testimonies of the other important characters for the story to be solved: they are friends, family, or simple acquaintances who know something important about the crime.

The player who decides to impersonate the guilty must therefore carefully read the plot of the crime, manage all the cards containing the clues necessary to solve the investigation, and provide all the answers that the characters will have to give to the investigators when they are interrogated. The answers of the various witnesses are provided ... but based on precise criteria. There are often reasons that prevent witnesses from always answering investigators' questions truthfully, and the case provides various "verbs" - before each testimony, such as "Declare that ...", "Know that ...", or "Admits that ..." - and with which to manage the various testimonies, based on the difficulty with which they can be revealed.
At the end of the game, when most of the clues were discovered, one of the investigators may believe that he has discovered the answers to the two basic questions:
1) what reasons led the guilty to kill, or what is the motive for the crime;
2) how the guilty materially managed to commit the crime, or his mechanics.
Then, the investigator begins to tell how things went, according to him.
For example, he may say that the guilty acted in revenge against someone, and used a knife to commit the crime.

If only one investigator remains in play besides the Guilty, the latter is the winner of the game.

Is there anyone who knows this game and knows how to name it in English? Thanks for your attention

Colpevole! ( meaning Guilty! ) is an Italian-language boardgame, published in 1992. It is easy to find numerous copies of it for sale on eBay.it. eBay Italy results for Colpevole!

The game's publisher was Editrice Giochi, literally Games Publisher. They published Parker Brothers games such as Monopoli, Cluedo, and Risiko!, a variant of Risk.

In 2016, Editrice Giochi was bought out by Spin Master Corp., «... a leading children's entertainment company.» http://www.prnewswire.com/news-releases/spin-master-expands-games-portfolio-with-editrice-giochi-purchase-566692661.html

I contacted SpinMaster Corp. by email and by phone, and spoke to a customer agent. This agent did some research and found that the game Colpevole! has not been translated to English.

So, the only alternative that I can see for you is to translate the game elements into English yourself.

Here are some screenshots of the games elements. Many more can be found of eBay-Italy. 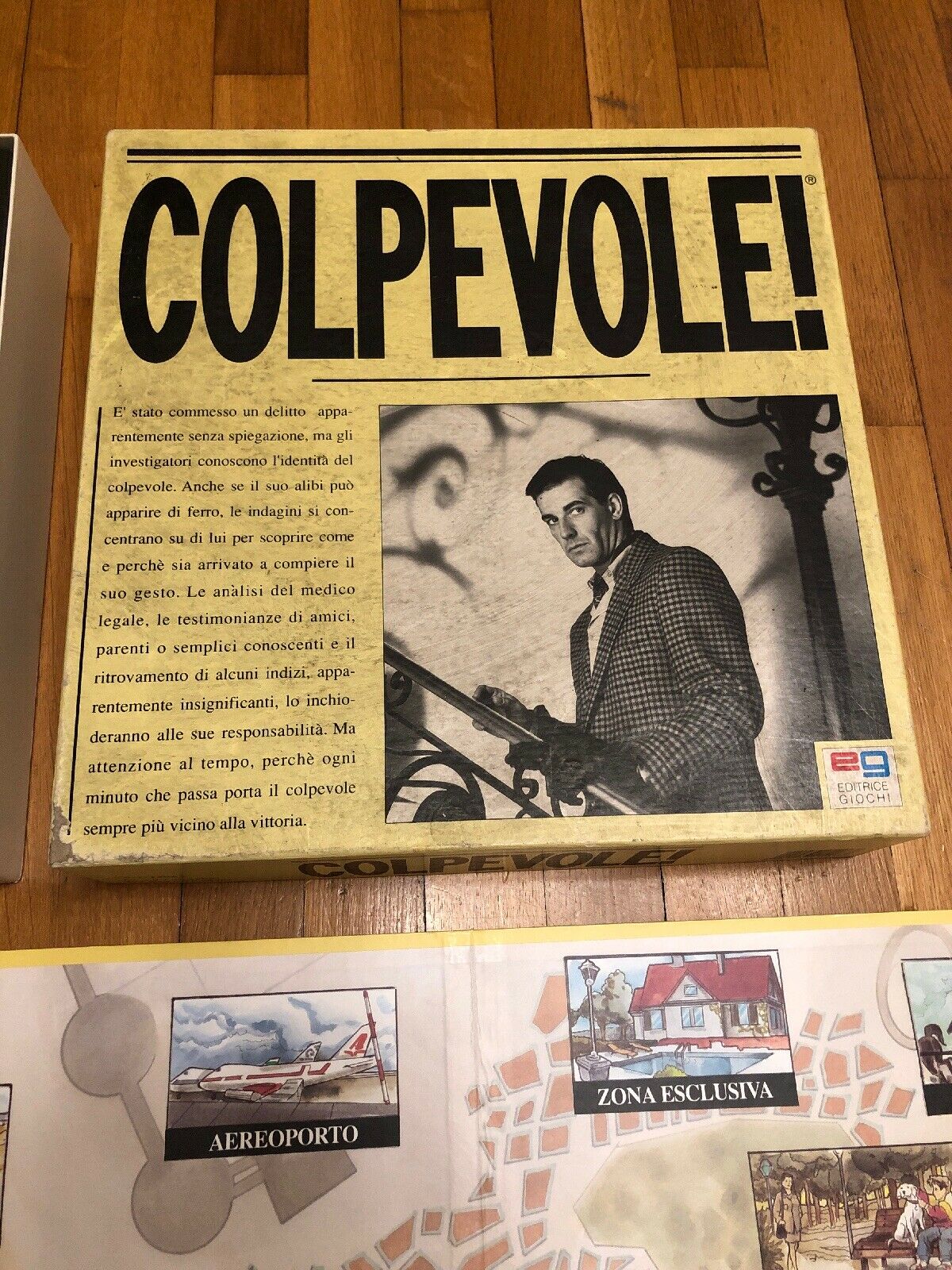 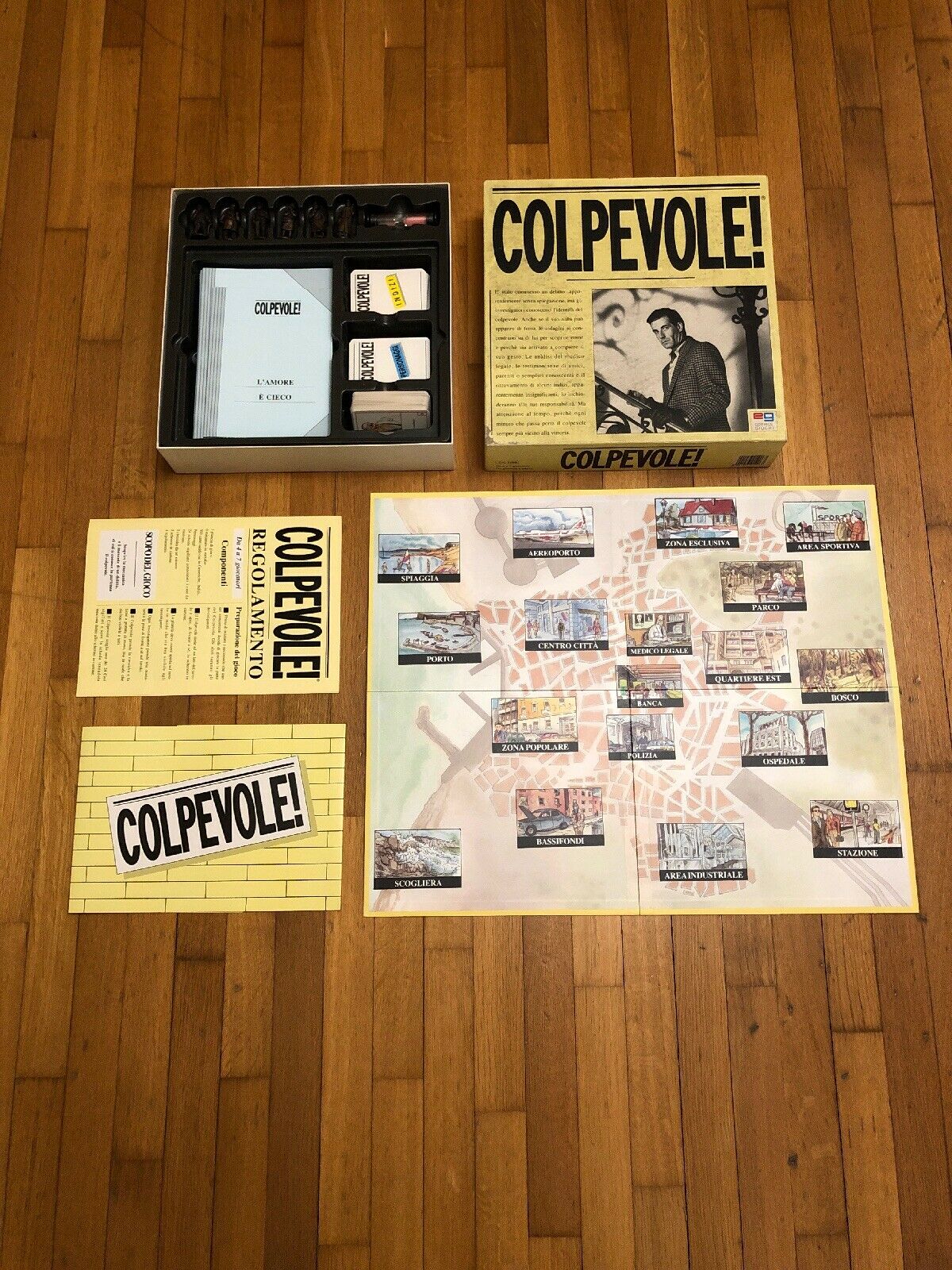 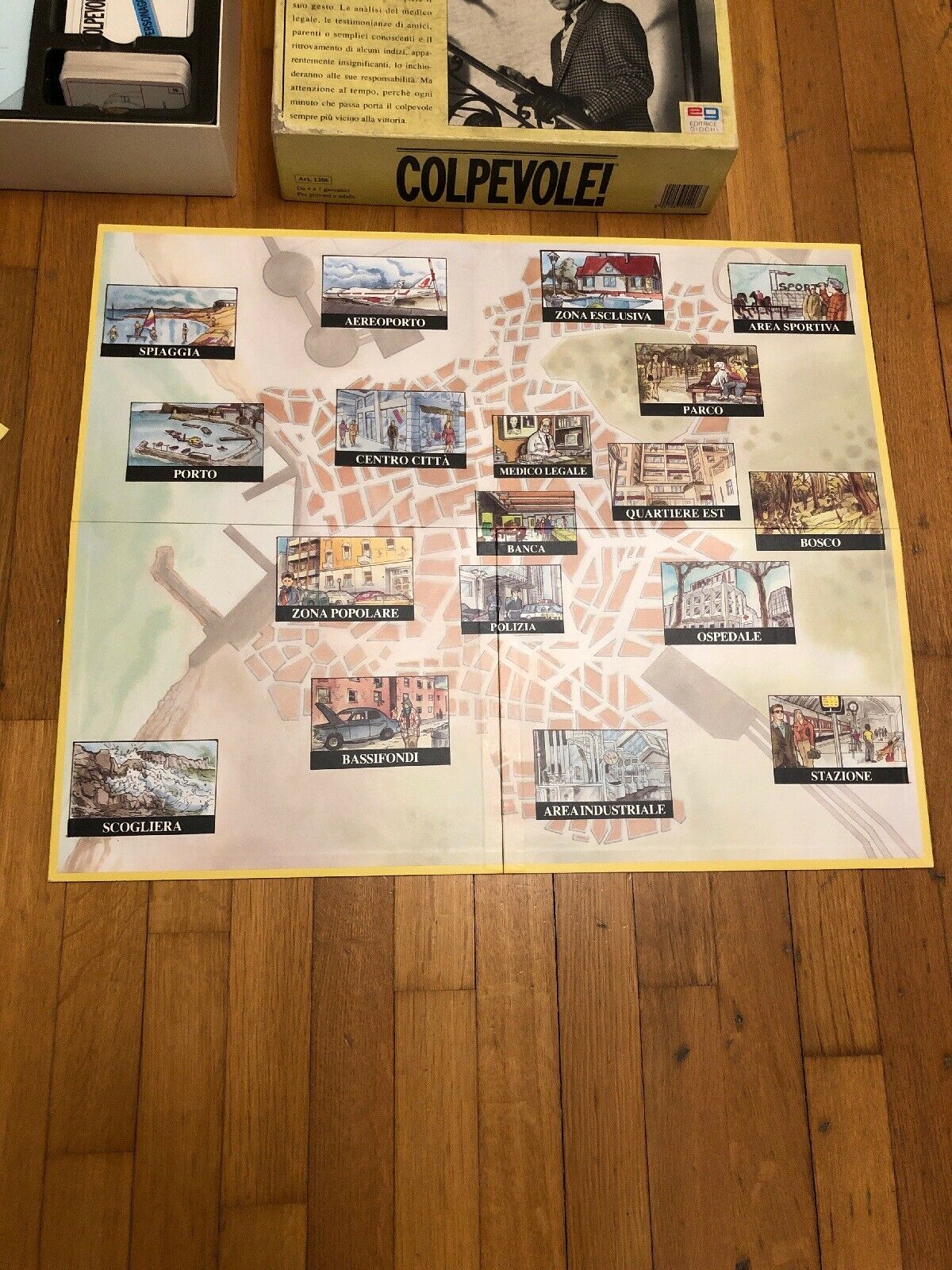 Video of gameplay (in Italian)

Not the answer you're looking for? Browse other questions tagged identify-this-game colpevole or ask your own question.