Does the camel caravan gives points at the edge of the oasis?

In Catan Traders & Barbarian expansion, if I place a settlement at the initial point of the caravan convoy, and it has a camel going through it, does it give an additional VP or not?

Three caravans are formed during the course of the game--each caravan consists of a string of camels that begins at the oasis. Each settlement and city adjacent to a caravan route is worth an extra victory point. (page 12)

According to the rules (page 14), the essential condition for obtaining an extra victory point is :

Each settlement or city located between 2 camels is worth 1 additional victory point.

Therefore, in the situation you describe, if there are two camels - one starting the caravan and leaving the oasis, and another that has come back to the oasis (see photo) then, if you build a settlement on the oasis between these 2 camels, you will get an extra victory point. The edge to the right of the settlement is considered an initial point of a caravan because a camel is leaving one the 3 caravan starting points. 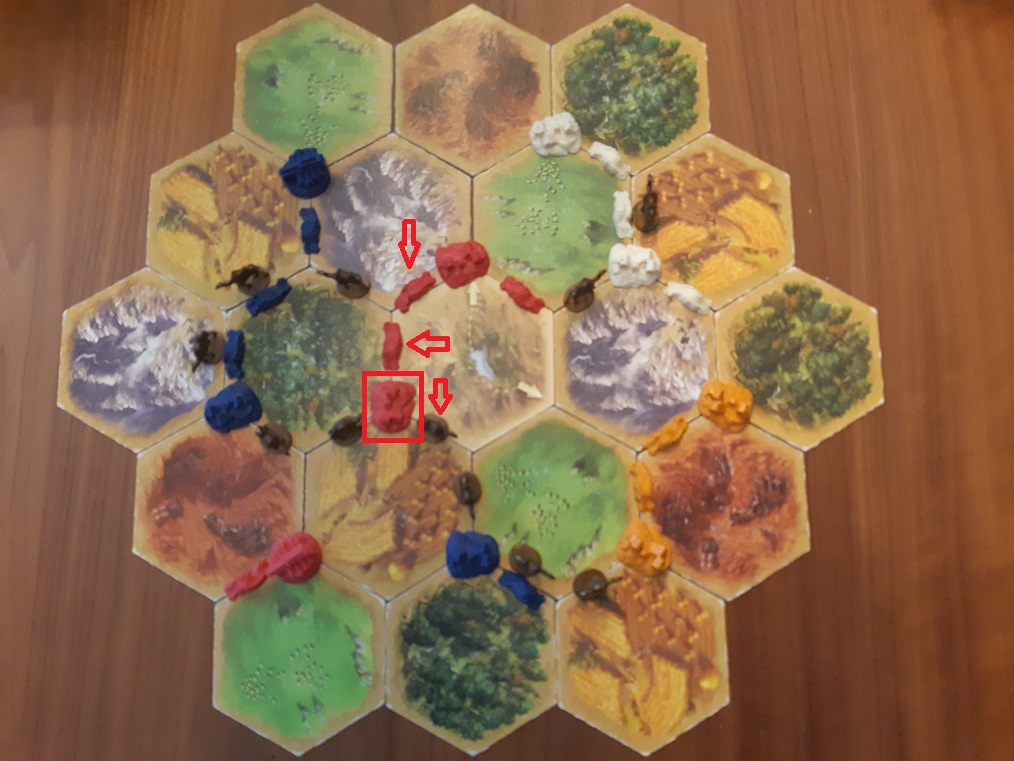 The photo above is a reconstruction of the example on page 14 of the rules.

In the photo, I have added the objects pointed to by red arrows : 2 red roads and one camel. By placing a red settlement (or city) on the oasis, in the position indicated by the red box, the red player will get an extra victory point because the settlement is between 2 camels.

Not the answer you're looking for? Browse other questions tagged catan-traders-and-barbarians .

13
When is the Richest Settler evaluated?
6
Cities and Knights: Played to virtual deadlock
3
Does the Pirate stop fish production when playing Seafarers with Fishermen of Catan?
2
Cities produce in Traders and barbarians of Catan