Anyone got any info on this coin obstacle course game from Micki Gemla Sweden?

I found this old coin obstacle course game from Micki Gemla Made in Sweden?

There where no hard cover so can anyone help me with the name of this game?
And also maybe give some more information about it?

It's a miniature golf sim game played with coins instead of balls. It was made in 1970 by Micki Leksaker Sweden. It was just called "Minigolf" 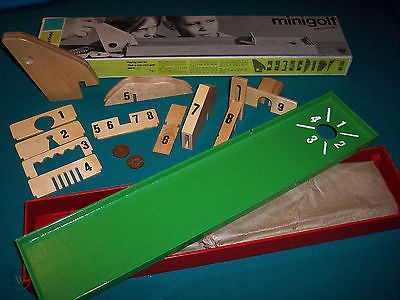 You play by rolling your coin down the tall slot/slide to take each shot.

Rules (printed on the box):

Playing rules for “roll-a-coin” mini golf game
Any number of people can play. The game comprises of [sic] nine different obstacles numbered from 1 to 9.
Obstacles number 5, 6, 7, 8, and 9 each have two parts.
One plays with an ordinary quarter coin or the Swedish 5 öre coin that is included, which is placed in the slot of the stand positioned at the edge of the playing surface.
The player is awarded one point for each play plus the number of points shown in the divisions (if the coin does not roll into the cup). The player may have 7 plays for each obstacle. If he does not pass the obstacle, then he will receive a 12 point penalty.

2
Old WW2 game played with cards instead of a board
6
Help me identify this card playing board game.
3
Information about "Make Twenty One, no more, no less" wooden Tabletop Game
4
What card game is this? 3 cards per player; always redraw from stack until end
3
Help Identify this Trucking Game from the Early 1980's
8
What's this game featuring a 15x15 peg board, and 60 pegs for the two sides?
9
What is this wooden animals game with unique dice?
14
Identify this space combat game with a letter based ship architecture
4
Svick Czech Card Game
7
What is this game involving white disks, fish, and wavy pieces?