Can Accelerated Rot deal 9 damage if you meet elemental requirements? 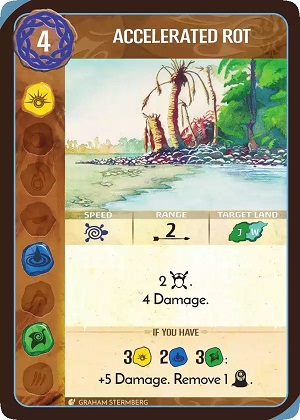 Has "+5 Damage. Remove 1 blight" if you meet the elements. Does this total to 9 damage or just 5, 2 fear and remove a blight? It seems to very clearly indicate it deals 9 total damage, but that seems very powerful.

The only relevant section in the manual, on page 17 says:

Elemental Thresholds: Optional effects which may only be used if the Spirit has gained certain Elements this turn. The requirement Elements are not "used up"; the threshold is simply a check to see if they are in play. [...] You may always resolve a Power as if you had fewer elements than you actually do. If you meet more than one threshold under a Power, do each of them in order, from top to bottom. Exception: If a threshold says "Instead", it replaces the effects of previous levels.

Since this doesn't say instead, it does seem to support it deals 9 damage - so we went with that. Can someone confirm for sure that's the right interpretation?

Yes, major powers are very strong when you hit their thresholds. I don't have a rules citation beyond what you list there, and I don't see anything explicitly in the FAQ about it, but the lack of "instead" and the plus sign both indicate that the power does 9 damage and removes a blight when played and you hit the threshold.

Compare to Pillar of Living Flame (3 fear, 5 damage, add blight if target land is jungle/wetland), which by the other interpretation would get worse at the threshold (+2 fear, +5 damage).

2
How to solve problems with the Invisibility power