I'm really confused, but it seems to be the convention that there is no "I": 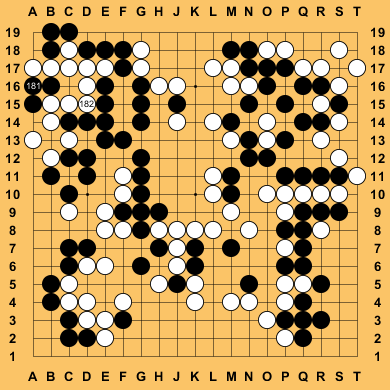 Zeiss isn't completely correct, this is actually the less common reason for omitting the I. The more common reason why I is often omitted where it would normally be expected between H and J is because in sans serif fonts the uppercase "I" is completely identical to the lowercase "l" (L). In a go board if you see a move noted in uppercase as I6 or lowercase as l6 without any other context you could not tell the difference in these fonts.

Confusion between a letter and a number would be much less common, since the letter in go is given first and the number is given second for hybrid notation, but confusion between L and I would be possible and is avoided by not including an I at all, thus guaranteeing that L and l both refer to the L column.

(for anyone with an interest in typography, this was actually intentional, allowing the lowercase l to be used in place of an uppercase I made it easier on the typesetters, they had more available of both that way and had less different symbols to worry about. Same way p and d or b and q are the same just rotated)

18
Why did black avoid the straightforward capture here?
8
How to begin learning Go?
5
4-4 high approach - why is the defensive approach prefered?
11
Why do all Go board sizes have an odd number of lines? Why is a 19x19 board so much better than a 20x20 board?
10
Why is this move considered bad?
4
Talking about Go: Using "he" and "she" for Black and White
4
Go Surrounding Rules
1
In Go (board game) under Chinese rulings how does the scoring of empty territory work?
3
Why are the white stones in the bottom left of this game counted as points for black?
8
Why don’t you capture more territory in Go?