Best move for this pattern, in Go

I am the black side. It’s my turn to play.

I see this pattern developing very often in early games.

Am I better to play a to make a chain; or, is it better to be pro-active on the left side, and try to block White from going left with b?

If I go left, the program sacrifices these two stones, and I don’t know why.

Whereas, if I play on the right side:

It keeps fighting for the area.

Can someone tell me what move is best and why?

Four stones is an enormous handicap on a 9x9 board. With perfect play by Black, White probably can't make a living group. If you're taking four stones, you presumably aren't going to play perfectly. The main thing to do here is stay out of trouble. Connecting below 5 is a nice solid move. Playing to capture the two stones is fine, too. As long as you keep one of the upper corners alive after that, there's no way for White to win. White has to play very unreasonable moves in a situation like this, so thinking too much about them won't teach you much.

Disclaimer I am about 7 kyu, and seldom play 9×9, so I defer to those with higher ranks or more experience.

I asked KataGo, running as an engine for Sabaki, and this is what it thinks: 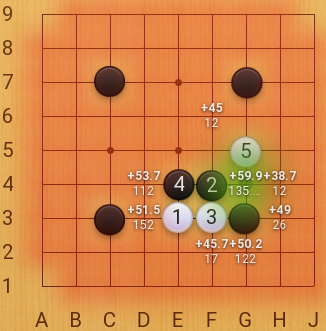 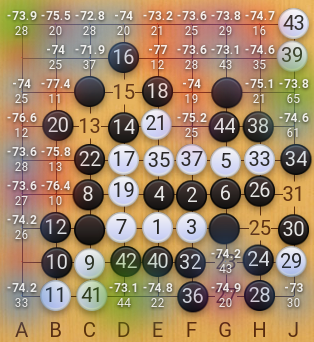 The first image shows that it rates the connection at G4 as best, expecting you to win by ~60 points if you play there; the second shows how it would play both sides after that. As you can see, White ends up separated into four chains, none of which is going to survive, and so the score is much higher. This could be because KataGo was perhaps not trained on 9×9 boards and/or not trained against such large handicaps.

You might suppose that Black should have won by 81 to 0, but Sabaki, when asked, shows the score as 71½, because it gives White 4 points to compensate the handicap stones and 5½ “komi” (to compensate for Black starting). KataGo evidently thinks slightly differently, but it all makes little difference.

I also tried playing 6 at G4 and then KataGo’s suggestions, and again Black (who is about to capture at B2) wiped the board with White, while after G3, White did manage to get one live group: 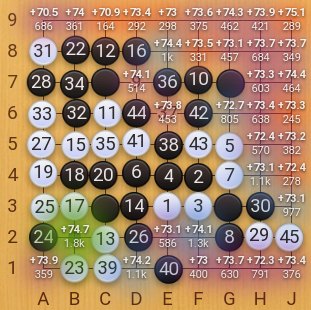 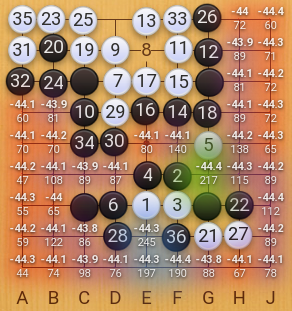 How should you play?

What can you take away from this? There are many moves that probably lead to a crushing victory for Black, if only they play right. As Tim K’s answer rightly says, White may well try weird or desperate tricks to confuse Black. Your best bet is to strike a balance between keeping things simple and keeping the pressure or White. The connection at G4 keeps your stones connected and makes it harder for White to connect his, so it does both. The fact that KataGo estimates it to be best is probably less important, as that could depend on some really complicated reading, and you can afford to drop a point or two and still win.

As your handicap reduces the balance will shift and you will not be able to simplify quite as much because you will not be able to afford to drop so many points. I quite liked D4 (rather than D3), as it prepares to grab a chunk of the top left while still making life difficult for White. I am glad to see this at least rated second best, even if the first estimate was about 6 points worse than G4.

How good were your moves?

I was not so happy with your move 8 in your first variation, as I expect you to capture those two stones anyway; by going on there, you let White play 7 and 9 in the top half, which might be enough to cancel out the advantage of your handicap stones: he has 3 stones to your 2, but it is your turn. Your 8 keeps it simple, but the cost may prove too high. As you say in a comment, once you have an advantage you can play somewhere else; actually it is more that an area gets played out, and for either side to play the next move in that area is only a small amount better than letting the opponent do so. Later in the game the overall “temperature” drops and one can return to those areas, or their temperature may increase as they are destabilised by nearby developments.

In your second variation the position looks better balanced: you can strengthen your top position while keeping some pressure on his stones at the bottom, but you do have some cutting points you might need to defend. If you can play C5, stop White living in the top right and make sure you either defend the cutting point at E5 or live in the bottom right, I think you should win.

As mafu said in a comment, you seem to be picking up some important principles; I hope you continue to improve and, most important, to enjoy playing. You might want to join one of the Go servers if you have not already done so – and when coronavirus calms down, your nearest Go club.

I cannot tell you, what move is best, but here is how I (around 7k) think about it:

Bottom line, either move can be made to work well, either one has a possibility for white to live at the lower border, but the move at b puts much more pressure on the white stones. This is why your computer does give up those two stones in the following sequence: It knows that your stones are connected, and trying to live beneath your black wall does hurt its position on the rest of the board. Better to leave the lost battle behind and try to gain some ground elsewhere. Which is precisely the story that your second diagram tells.

6
Komoku-Oogeima joseki order variation
6
Magic Sword: Peaceful Variation or is Punishment Possible?
5
4-4 high approach joseki incomplete?
5
4-4 high approach - why is the defensive approach prefered?
6
Why is this the solution?
12
Why is this tsumego solution wrong?
10
How does black kill white in this Tsumego?
3
How would this seki be scored at the end of the game?
6
Mysterious move
7
Why don’t you capture more territory in Go?