How can I tell the difference between early Magic: The Gathering card editions?

I have a few Magic: The Gathering cards whose editions I'm having trouble identifying. They are obviously from either Alpha or Beta, since they have black borders and the same design as the Unlimited edition, but how can I distinguish between both editions?

ALPHA cards are black bordered and have very very rounded edges (2mm radius) compared to all other kinds of magic cards (1mm radius). Just pick up a black bordered card and overlay them on top of each other. If the corners are VERY different then you have ALPHA, otherwise you have BETA.

There are several cards that were corrected between alpha and beta and can be used to instantly identify extremely worn cards. As cited on Wikipedia

One set that recently came to my attention that is not identified on the identification chart for English cards (see below) is called "Alternate 4th Edition". More info about those cards can be found at The Magic Librarities, here are the main points:

This Magic Set Identifier flowchart will help you determine the set of English cards up to about 2001, beyond there it's fairly easy to identify from the set symbol on the card. Thanks to Hackworth for providing an up to date url for it!

There is an updated version of that flowchart that includes foreign language cards as well. While identifying English cards is relatively easy, there are some difficulties with other languages, especially with German Revised White Border Cards (aka "Unlimitierte Edition" (unlimited edition) - not to be confused with the Unlimited set!). Some of them are almost undistinguishable from Fourth Edition cards.

The Green Disenchant Project has some more in-depth information and scans that may help identify such cards. 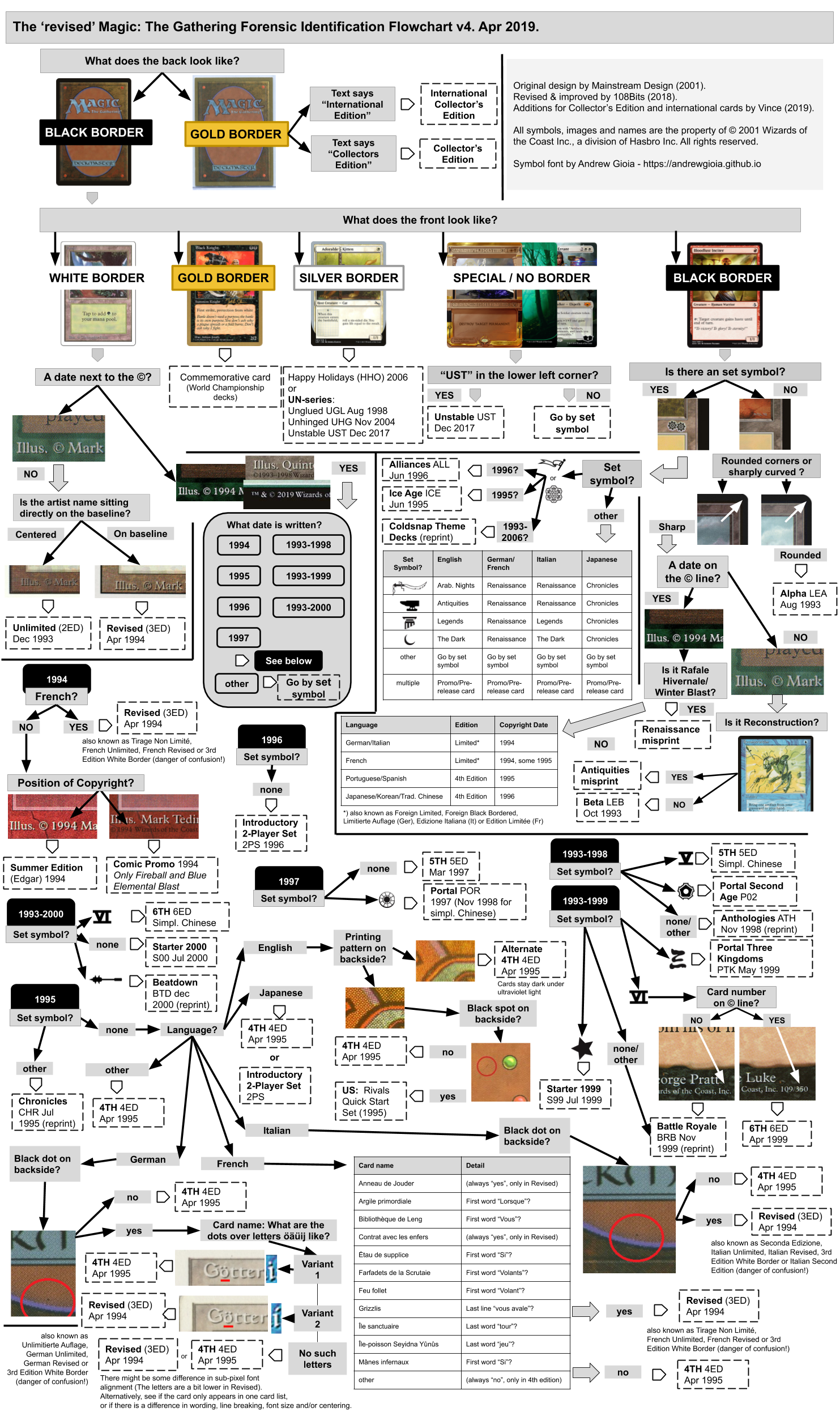 Not the answer you're looking for? Browse other questions tagged magic-the-gathering edition-comparison or ask your own question.

0
From which expansion is this magic the gathering card?
24
How can I translate a Magic card printed in a language that I don't know?
17
Where can I sell my Magic: The Gathering cards?
12
Inherited thousands of Magic Cards
11
How should I determine whether a deck is legal in a particular format?
11
What's the most efficient way of determine individual card values for my collection?
9
How do I identify non-English Magic cards?
7
How to tell rarity of old magic cards?
3
Why do cards from Alpha have to be in opaque sleeves?
2
MTG: What set is Seelenruhe (Tranquility in German) from?
See more linked questions

9
How have editions of Bang! been different from previous ones?
7
Is there a simple strategy for re-learning Magic the Gathering?
4
How does metalcraft work in Two-Headed-Giant?
0
How to “dematerialize” a deck in the Magic Assistant card manager?
2
MTG: What set is Seelenruhe (Tranquility in German) from?
5
How can I ensure the Commander deck I'm creating is appropriate for my group's meta?
13
Why do double-faced planeswalkers from Origins get exiled before being transformed?
4
How does the example of rule 601.2h work?
4
What's the cheapest way to buy a large number of Magic: the Gathering cards on Cardmarket?