I read a review of Lanterns: The Emperor's Gifts that argued:

The base game of Lanterns has a flaw, and it was one that threatened to kill the game for me over time. You see, the "four of a kind" tiles were statistically better than the other types, to a degree that if you did nothing but target them through most of the game (until they were depleted enough to make the card-cost-to-VP ratio more even with the other dedication types), you were probably going to win.

In a reply, the reviewer explained:

So, in the base game, to start, it's 4 cards for 8 points, or 7 cards for 10 points for the first tile. The latter is wildly worse, for what I believe are obvious reasons. It's a 2:1 point ratio vs. something near 1.4:1. You get 2 less points, but keep 3 cards toward your next turn-in. At that point, those three cards are worth more than 2 points regardless of which dedication type you use. Now extrapolate that advantage across a whole game. Taking it a step further, a 6-point four-of-a-kind dedication is still a better ratio. Which is exactly my point. It takes a lot of depletion in four-of-a-kind before this isn't true. And if the other piles are being similarly depleted, it's often going to be true for the entirety of a game.

My experience is the game is very competitive. I just finished a 4-player game that ended 45, 43, 43, 42. (I was 43 and my 7-year-old son was the winner!) We depleted the 3-pairs dedication and almost depleted the all-7-colors dedication leaving 4-of-a-kind barely touched. If one of us had saved their lanterns by going after 4-of-a-kind, would we have made up for the smaller payout of that dedication? Does the one-dedication-a-turn rule come into play in the analysis?

It's hard to say what would have happened in your game had more 4-of-a-kind tiles been claimed, but it only takes 3 (8, 7, 7, if I remember correctly) in a 4p game for the points per card to be more in-line with those of the 6- and 7- card dedications.

To answer the question in the title, one of the goals for the expansion was to make the 4-of-a-kind strategy (even if only for the first few dedications) less powerful/obvious. Yes, there is a trade-off when considering the limited opportunities to dedicate in the game, favor tokens, etc., but 2 points per card is very strong while you can get it!

Source: I developed the game with Randy, the publisher.

I put together a spreadsheet to figure out what the payout schedule looks like for four players: 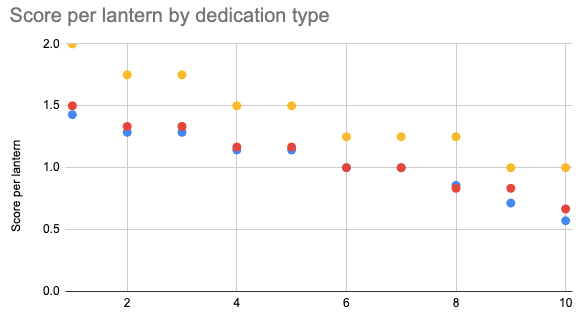 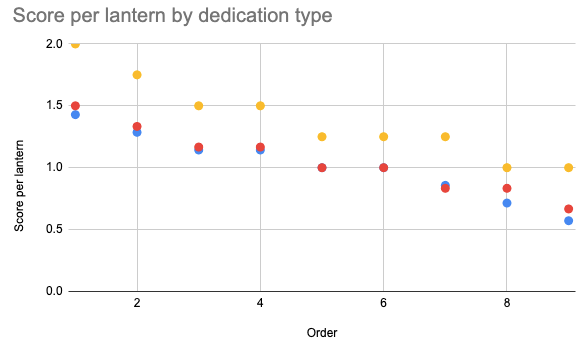 And this is for two players: 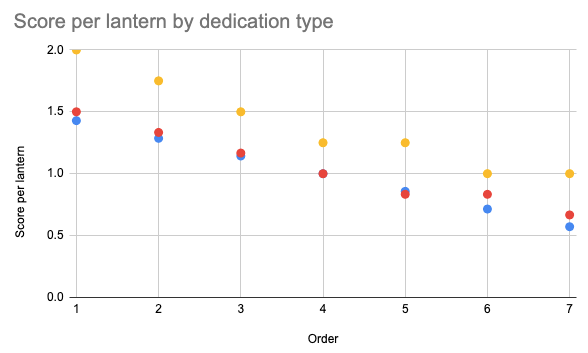 You can see the pattern is consistent:

This seems to be by-design. One potential reason could be that 4-of-a-kind is harder to obtain than other dedications. I believe I have correctly calculated the odds having each dedication by hand size if lanterns are distributed randomly: 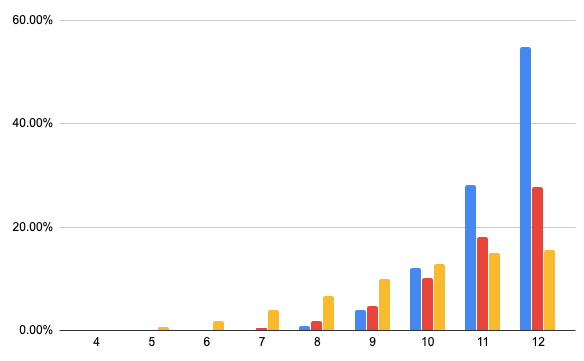 With 4 lanterns there's a tiny chance (0.13%) you'll randomly get 4-of-a-kind. As you collect more lanterns, the odds improve. At 6 lanterns, you might also get 3-pairs (0.07%). At 7 lanterns, collecting all colors is possible (0.12%). Obviously, collecting more lanterns increases the odds. But your chances improve a lot faster for the other dedications than it does for 4-of-a-kind. Therefore, collecting 4 cards of the same color could be a harder feat than the other dedications.

Hand size is the biggest factor determining which dedications you can make. The game gives you two ways to improve your odds: lake tile placement and spending favors. Given the data above, it seems the best strategy is to focus on collecting one color, which has the following advantages:

The charts also suggest a simple fix if this bothers you: remove a 4-of-a-kind dedications from the top of the stack for each player in the game. That shifts the payout so that every dedication gets roughly the same score per lantern. It doesn't eliminate the other advantages, however.

On the other hand, there might be strategic possibilities if all players understand the advantages of 4-of-a-kind. In particular, it could make denying a color to another player a more viable tactic.

3
Kingsbridge Scarlet: trade 1 cloth for 3 VP
7
In "Prophecy", when going onto a space that has a villain on it, are you required to fight it?
5
Are "ties" considering "successful" checks in Firefly Adventures?
0
Are there any side effects if am supposed to draw a card but have no cards to draw?
4
How balanced are the character powers in Colt Express?
0
How are storage costs computed for RMUs and FIUS?
0
What are the rules to the card game “Queenie”
0
Are potions and ingredients discarded when crafting spells?