Poisoning as an attack in Pokemon TCG

The item card Bent Spoon prevents all effects of attacks apart from damage. Toxapex GX had an attack that causes 100 damage instead of 10 between turns. Does this damage class as an effect of an attack or, direct damage as an attack?

Super Intense Poison
Your opponent's Active Pokémon is now Poisoned. Put 10 damage counters instead of 1 on that Pokémon between turns.

Special Conditions (including Poisoned) are considered an effect of an attack. It is not related to damage in any way. The second sentence alters the number of damage counters that are put on your opponent's Active Pokémon between turns, but this is also not considered damage.

Bent Spoon is a Pokémon Tool with this effect:

Bent Spoon - Item - Pokémon Tool
Prevent all effects of your opponent's attacks, except damage, done to the Pokémon this card is attached to. (Existing effects are not removed.)

Because the effect of Super Intense Poison is just creating an effect (Poison) on the targeted Pokémon, Bent Spoon prevents this effect from happening.

As a result, if your opponent's Active Pokémon has Bent Spoon attached, your Toxapex-GX's Super Intense Poison attack does nothing.

The "Put 10 damage counters instead of 1 on that Pokémon between turns." part is also prevented, so if your opponent's Active Pokémon is already Poisoned, the Poison does not get changed into 10-damage one. 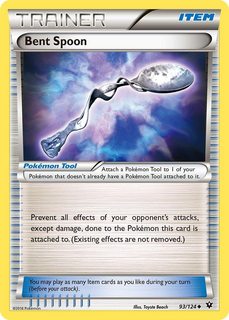 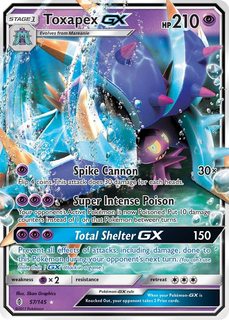 So, this one is a bit tricky, because it depends on when the poison was applied.

If your pokémon is already poisoned, then the poison damage will still effect it even if you attach the bent spoon, as it's no longer an effect of your opponent's attack, but rather is an effect of the poisoned state.

However, if Toxapex GX uses Super Intense Poison, it would do nothing to the Pokémon. Damage from poison is not blocked by bent spoon, but the effect of placing the poison token on the Pokémon is. Thus, no damage would be done, as the "Put 10 damage counters instead of 1" refers to the poisoned status.

As a side note, even if it had simply said "Put 10 damage counters on the defending Pokémon", it would've still been blocked. Putting damage counters is not doing damage, they're two separate mechanics (that accomplish the same thing).

You can search for "Holon Energy WP" in the compendium-ex, as this is a similar card to Bent Spoon, and they have a bunch of rulings about it.

Q. Do I get to remove any Special Conditions (i.e. Poison, Asleep, etc.) when I attach Holon Energy WP to that Pokémon?

A. No, Holon Energy WP doesn't remove Special Conditions, but it prevents them from being placed by attacks made after it has been attached. (May 18, 2006 PUI Rules Team)

Q. Does Holon Energy WP prevent an opponent's attack from placing damage counters onto that Pokémon?

A. Yes, "placing counters" is not the same as "damage done", so Holon Energy WP prevents placing counters onto that Pokémon. (May 18, 2006 PUI Rules Team)

Q. Wobbuffet attacks an opponent using its "Shadow Tag" attack. During the next turn a Holon Energy WP is attached to that Pokémon. Will this prevent the Shadow Tag effect from taking place at the end of the turn?

A. The Shadow Tag effect is a pre-existing condition on the Active Pokémon that was attacked by Wobbuffet. Holon Energy WP only prevents effects from new attacks during the time while it was actually attached; it does not remove effects already on a Pokémon. So in this scenario the Shadow Tag effect would still work. (May 18, 2006 PUI Rules Team)

2
Are Item Finder and Dowsing Machine the same card?
2
Brand new Pokemon Cards bent in packaging!
5
What to do when you "return a Pokemon to your hand"
4
Pokemon Asleep Status
5
Is there a card similar to Lugia from Fates Collide that targets GXs instead of EXs?
0
Does Mewtwo-EX's Damage Change exchange or move damage counters?
1
Can Mewto and Mew Tag Team GX's Perfection ability be prevented from using by using Golduck's amnesia attack?
0
Does Altaria GX Euphoria Attack heal Knocked Out Pokemon?
3
Pokemon TCG Starting Decks
3
Should A Big Parasol on a Decidueye Protect me from Dragapult VMAX Shred