How do split cards work? 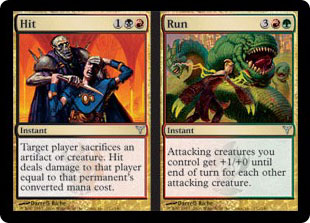 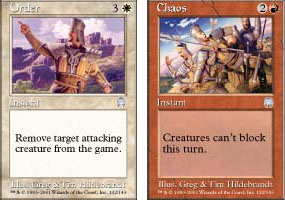 I saw these cards on the Internet and quickly became curious: How in the world do they work? Do you pick one of them to play and then discard the card, or can you play both? How does their color and mana-cost duality function with cards that depend on them? When were these cards added to MTG?

Note: The answers given here were correct at the time they were written, rules changes have since made parts of them incorrect.

They work as if they only had one of the sides attributes while on the Stack, and as if they had both sides' qualities in every other zone.

If an effect is asking for a particular characteristic, it gets two answers. For example, Infernal Genesis asks you to reveal the top card of your library and add a number of 1/1 tokens to the battlefield based on the converted mana cost of the revealed card, if you revealed Hit//Run you would get 8 tokens, because the converted mana cost of the card would have two answers 3 and 5.

If an effect is performing a comparison, it only gets one answer. If either side would return a Yes answer when performing the comparison, then you would get a single Yes. For example, if you used Sunforger to search your library for a card that was red or white and had a converted mana cost of 4 or less, you could search out Wax/Wane (because for one of the sides, you would get a yes - Wane is white, and has a CMC of 4 or less) and still cast the Green side (Wax) of the card (only the search is restricted by color and CMC).

When casting a split card, you choose a side and proceed to do the normal process for casting a spell. Announce the spell, choose targets, pay costs, etc.

The Split Card type was added to MtG first in Invasion Block.

708.2a If a player casts a split card, that player chooses which half of that split card he or she is casting before putting it onto the stack. Only the half that is being cast is considered to be put onto the stack.

As of Amonkhet, these cards no longer give separate answers for characteristics - they give one answer that combines the characteristics of both halves. Some of this makes no difference, as explained here Infernal Genesis will still give 8 tokens for Hit//Run because it now gets one answer, 8, instead of two answers 3 and 5. Other times the difference matters, Isochron Scepter can no longer imprint Bound // Determined because the card no longer returns 5 and 2 for CMC, it returns just 7.

There are now different kinds of cards split similar to these, and some of the rules have changed since the original question was asked.

For example: Fire // Ice. These cards are read with an “and” joining the two names, thus “Fire and Ice”.

These cards work exactly the way you asked, you cast one half of the card for the casting cost, get that effect and the whole card goes to the graveyard. You don't have the option to cast the other half.

In Return to Ravnica block, a new ability was given to split cards, fuse, which allowed you to cast both halves. The cost would be the combined cost of both halves, they would be put on the stack as a single spell and would resolve starting with the left half (which usually made the right half work better anyways). You could chose to play only one half of the split spell.

For example: Never // Return. These cards are read with a “to” joining the two names, thus “Never to Return”.

The rules for split cards changed, the most recent change was when Aftermath cards were created in Amonkhet. Before the cards would be seen as both separate and combined by effects letting Wear // Tear be seen as a 1, 2 and 3 CMC spell. This let some spells be abused by using the smaller half to meet the imprint requirements of Isochron Scepter but casting the higher half, or using Counterbalance to get three CMCs worth of counter power. Now the CMC of split cards is always the combined CMC of both halves, EXCEPT while the spell is being cast and on the stack, where only the parts paid for are counted. The same is true for the colors of the spell, the colors of a split card are both colors everywhere EXCEPT on the stack when being cast, where only the cast part(s) colors are used.

This is covered in the comprehensive rules:

708.4 In every zone except the stack, the characteristics of a split card are those of its two halves combined. This is a change from previous rules.

708.4c A split card has each card type specified on either of its halves and each ability in the text box of each half.

Adventure Cards are not Split Cards

These do not follow the split card rules listed above, since they are not split cards; instead they follow the Adventurer rules. Adventure cards are treated as if they are only the creature half at all times except when they are on the stack being cast as the adventure.

7
How does Jandor's Ring work with modern Magic rules?
6
Is a spell with split mana in its cost a multicolored spell?
7
How has the rise of limited formats affected MTG set design?
11
How does Fist of Suns work with my Commander?
11
How to store and organize cards for Magic the Gathering?
5
What is the converted mana cost of fuse cards
40
What's the deal with the new Wastes land and the diamond symbol on it?
8
How do Gatherer Rulings interact with existing rules?
7
How does Hour of Devastation's Neheb the Eternal work with extra combat & main phases?
10
How does Dreadhorde Arcanist interact with split cards?