Catan Road Eligibility for Diplomat with Knight In Between?

I recently played a game of Catan with Cities and Knights. We had a situation like the following (excuse the horrendously crude art). 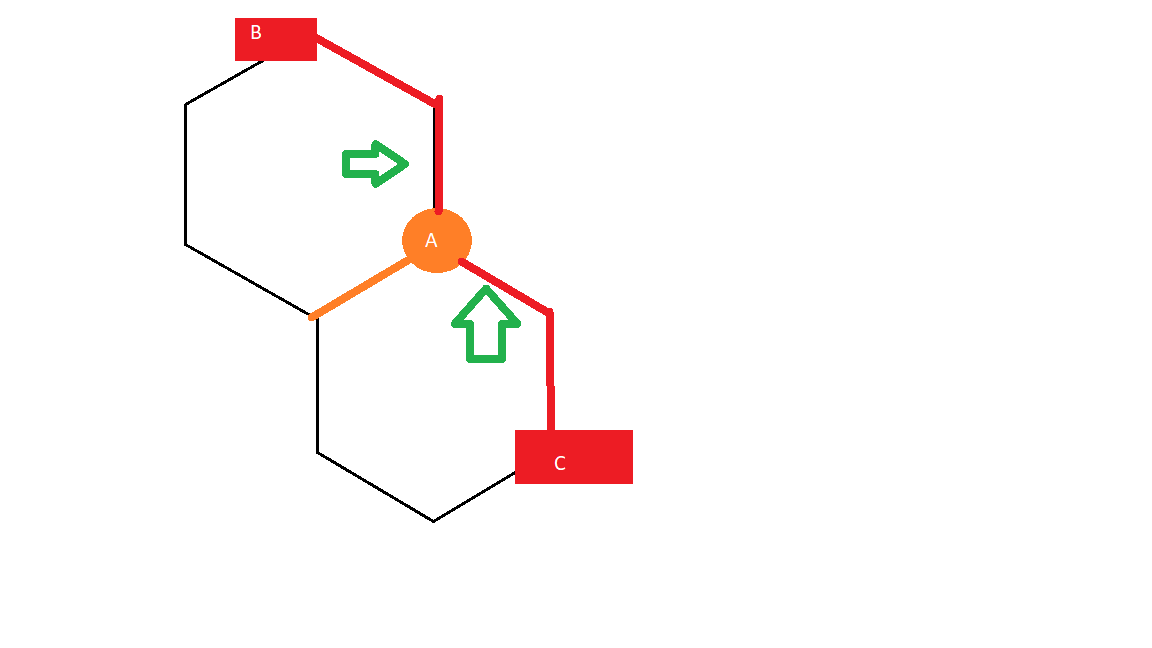 Where an Orange Knight (A) is breaking up some roads between two Red Settlements (B & C). My question is if orange played a diplomat card, would they be able to take either of the adjacent roads (indicated by the green arrows)?

The C&K rules say this under the Diplomat card details:

You may remove an “open” road (without another road or other piece at one end). If you remove your own road, then you may immediately place it somewhere else on the island (following all the normal building rules) for free.

My contention is that yes, orange could take either road. I think this is the case because a knight has the ability to break up longest road, which to me, seems like a knight placed like this would break up any road into two separate parts. But I'm asking because the almanac is not explicit as to what a 'chain' in

is. So although the roads would normally not be at the beginning or the end, now that there is a knight there, I believe that they are both 'ends' of a 'chain' of roads, which would mean they are eligible to be taken.

However, some of the other players disagreed. Is there anything that explicitly clears this up in the almanac or even in the FAQ's?

Oddly this is clarified in the FAQ under When is a ship “open”?

The full answer is that a knight will interrupt a continuous road, but will not make the road "open", while this is a slightly confusing aspect of the rules it's there to prevent "orphaned" roads, which were not handled in the rules until the advent of volcanoes.

Essentially a road is only open if it is at the end of a trade route, not if both ends are connected to other pieces from the same player.

Not the answer you're looking for? Browse other questions tagged catan catan-cities-and-knights or ask your own question.

13
Where did the "can't build next to the robber" house rule come from?
6
Seafarers: The Fog Island -- discovering hexes with the Road Building Development Card
7
Can Road Building Progress Card be played with only 1 road remaining?
8
Is it possible for a person to lose "Pirate Islands" Seafarers scenario before the game even starts?
4
Can a Catan Volcano destroy a knight?
10
Catan: Play any development card before rolling
0
Clarification of the typo in the Almanac's entry for Intrigue
3
Game of Thrones Catan: Can Othell move a road segment from an “interrupted” road chain?