I finished last season ranked mythic on MTG Arena. I wasn't paying attention to the season, had no idea something was up, and was simply playing for fun (like, if I'd known what was at stake and was playing to qualify, I would've stopped playing immediately after reaching mythic at rank ~150). Therefore it came at a great surprise to receive this email from Wizards: 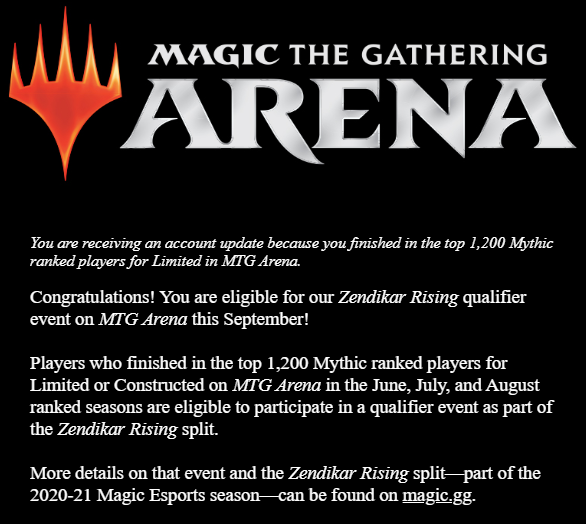 Looking at the magic.gg website, it seems this is going to be a BO3 constructed event coinciding with a set release. I suspect this format is not my forte, because making and testing completely new decks is not something I'm very interested in - I usually just copy some established deck and change some cards. If there is a new set then everything is in flux and I would have to figure out the metagame.

I would've stopped playing immediately after reaching mythic at rank ~150

Slightly an aside: that probably wouldn't have qualified you; your rank goes down if you don't play as others get wins and move up.

How competitive are these events?

Pretty competitive. They include what are by some definitions the best 1200 players in the world1. That puts them well above the "entry level competitive" FNM. The closest analogy to "the old world" is probably a Grand Prix, but it isn't a perfect match at all; certainly below the old Pro Tour level, which had only a few hundred of the best players in the world.

How much preparation is necessary to succeed in these events?

That's not a question we can answer, particularly given that Magic is a high variance game. Some people will put hours and hours into understanding the metagame, then designing and tuning decks to find what they think will be most successful... and drop at 0-4 after some unlucky draws. Other people will just take their favourite deck unchanged and make Day 2.

How do people even prepare?

Test, test, test. Perhaps the important thing to note here is that the tournament metagame is likely to be significantly different from the Arena ladder metagame - the ladder always features a lot more aggro than tournaments as aggro decks allow players to play more games quickly on the ladder and move up quicker. As an example, while the infamous Temur (or 4c) Reclamation decks made up 25-30% of the top end of the Arena ladder, they made up 55% of the recent Players Tour Finals decks.

If I decide not to play, can I pass the invite to someone else?

1. Yes, Arena ladder to some extent rewards quantity of play over quality of play. But the old qualification systems rewarded spiking a couple of tournaments over sustained quality of play, so neither were perfect.

Not the answer you're looking for? Browse other questions tagged mtg-arena or ask your own question.

1
Where can I find in-depth analysis of different digital card games?

2
MTG Arena - casting during opponent's upkeep
1
How to get the best value out of gold and gems in MTG Arena?
6
MTG: Arena. Is there any way to use packs other than open them?
4
How to view cards in the stack below the top card in MTG Arena?
4
Sacrifice blocking creature before damage is dealt no longer working (MtG Arena)?
1
In MTG Arena, does your "rank" affect what cards you can draft?
0
MTG reactive play denied in MTG Arena
1
MTG Arena: Enter battlefield ability denied by killing the creature causing it?
5
MtG Arena - Dina and lifelink