I'm trying to find a game I played 4 years ago. It was a very simplistic game, everybody had a specific color and bag of disc of their color. The board was also a simple grid. On the board you had your starting locations and also a bunch of other "land masses" ( different colored squares ). If I remember correctly the rest of the board background was a blue, maybe space. The goal was to color as much "land mass" as possible with your discs before everyone ran out. Taking your turn you would place 1 disc in a straight line direction away from your starting position until you hit land mass, another player, or the edge of the board. You could use any of your colored discs as a launch point to lay your next disc. Game ends when all players have placed. Scores were based on how much of each land mass you owned ( or how many discs possibly ).

I think there were other rules that allowed you to place additional discs. I think you could replace a players color with your own in certain circumstances. Disc placement may have been based on dice rolls. I don't remember any cards. If I were to guess this is game came out maybe 2005+? We played as 3 players, I would think maybe 4 or 6 is max player count.

Glüx is a family game all about illuminating rooms. Every player tries to play the brightest light tokens in different areas on the board, thus gaining the majority in those areas. Who can place their light tokens in the cleverest way and illuminate the most areas?

It looks like you decide how many spaces you move based on the number of pips from the disc blindly pulled from your bag. I was way off on the date, it's only a few years old. Also surprisingly expensive for a simple game that's 4 years old. 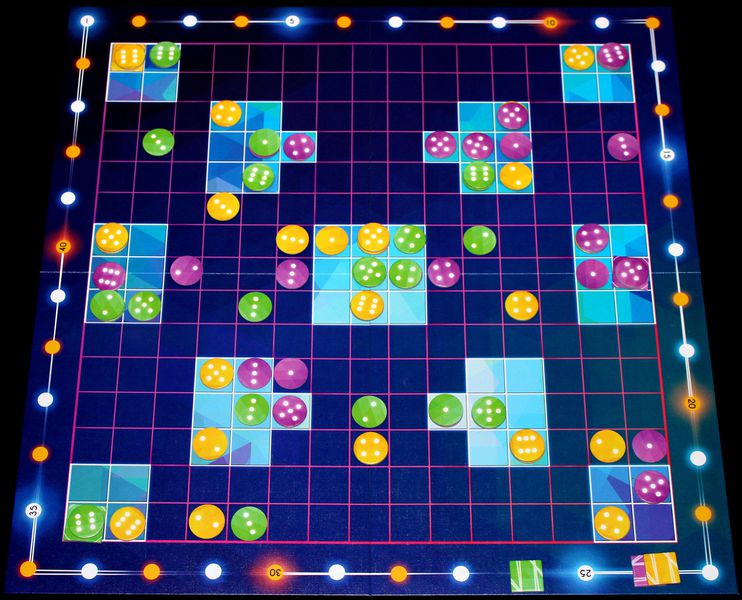 5
A board game with astronauts?
8
Genre-mash up battle game
5
What is this game with cards you describe, draw, or act out, decided by an electronic unit?
3
Board game that you set up each time differently with little cards
11
Adventure board game I had as a kid
14
Does anyone recognize this monster family board game?
7
Identify this game - 4X board game between 2000 and 2010
11
Identify board game with a castle divider, air plungers, soldier-shaped plugs?
1
Identify a fantasy board game from the 90's