Can you identify this likely chess variant?

I frequent a thrifting board game thread on BGG (BoardGameGeek). Recently a nice copy of a supposed chess variant appeared and we cannot seem to identify it. 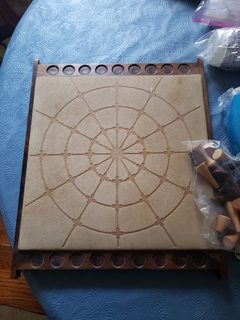 The board has nine slots on both sides for pieces and it came with 9 pieces for each player. Pieces look like chess pieces with two rooks, two bishops, a king, and 4 pawns per side.

Did determine the designer is Arne Basse and the game appears to be from the 60's.

Designers name doesn't appear to help much other that to affirm that is is likely on of their designs as it is similar to regular chess board in material composition. That does lead to the only only other mention of this game, I could find, from chessvariants.com 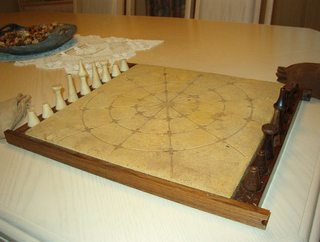 It was passed onto me from my parents, They said it was called "Viking Chess", but I haven't been able to find it among the variants at your website under that name (perhaps I have not looked hard enough).

It has 9 pieces per side (king, two bishops, two castles, 4 pawns). It has a spiral board with 36 cross shape places and a star in the middle.

I am trying to remember the rules as the original set are lost. My faint recollection was that each piece "entered" the spiral from the sides.

Between the two posts it was surmised that this is not the following:

Determination based on board layout and piece composition.

Can you identify this game?

Michael Ireland, the person who posted their copy on chessvairants.com, remembered some details, and replied with some added information (original post here). I will quote it here:

Viking Chess Rules as best as they can be remembered – November 28, 2020

The goal of the game is to checkmate your opponent's king as in regular chess.

Board: The board is made up of "rings" linking "crosses" (the spaces). There is a centre >space, the “star”, in the middle.

All pieces start off the board.

On their first turn (white goes first) each player places their king anywhere on the >board on any space except the centre space (I believe that no piece could start on the >centre star because it gives too much of an advantage to start there - but I am not 100% >certain of the rule). In the second and subsequent turns, each player can either move an existing piece on the >board or bring another piece onto the board as per turn 1.

Once placed on the board a piece can enter the centre space or through it.

A player takes an opponent's piece by moving a piece into their opponent's piece's space. >Once a piece is removed from the board it cannot return. I do not believe there is a >rule to promote a pawn to a Bishop or Rook.

The King is the strongest piece on the board combining both the Rook's move (3 up or >down) and the Bishop's move (3 around a ring in either direction).

If the King is taken/mated the game is over.

This game was advertised as The Windrose Game (Danish Viking Chess). I still have the board and pieces purchased at Modern Designs in Ithaca NY. As I recall the small pieces were called Thralls and each piece entered from the edge, one per player's turn. The player could opt not to enter a new piece and play one already on the board. I too have lost the rules and would love if someone could find them. Thanks!

Not the answer you're looking for? Browse other questions tagged identify-this-game chess variants or ask your own question.

12
Chess variant that allows humans to be competitive vs computers
10
What is this game, played with chess board and pieces, but with totally different rules?
3
Are there any chess sets with more than 32 pieces?
2
In chess, how many times can a piece be attacked at once?
5
What is the name of this board game?
15
Is a pawn allowed to capture onto a promotion square?
5
Identify this game about using 3 cards sets to take control of Pawns