When playing Attack, the turns of the current player are transferred to the next player, and a fixed number of turns are added. However, this seems to be inconsistent with the official text:

The text suggests that this would be the effect:

The inconsistency is that P1 already has 1 turn when playing Attack, which would imply adding 1 turn per Attack card:

This is clearly not what the text suggests, which is that 2 turns should be added. But even with that change, it seems like 1 extra turn should be added to everything:

Is the inconsistency a result of misinterpreting the description, or is it just that the Attack card has a special extra effect of subtracting 1 turn when the turn count is 1 before adding (3 after adding)?

Transfer turns to the next player, add 2 turns, and subtract 1 turn if the turn count is 3.

I say that it seems inconsistent because in this example, P3 can have 2 extra turns from a 1 turn count difference:

Or would P3 get 3 turns (4 if the second line is deleted) in this case, corresponding to the following effect?

This last rule avoids removing 2 turns from using 1, but it means 1 original turn and 1 Attack turn left are different states (but only when using Attack).

For all of this to make sense, I believe the first step should be to differentiate between a normal turn and an attack turn.

If you do that, all different scenarios and rules start slowly making more sense and matching up:

See how I edited in a word there? Would it remove the contradiction from your examples?

So far so good!

The inconsistency is that P1 already has 1 turn when playing Attack, which would imply adding 1 turn per Attack card

Now this inconsistency is gone! Normal turns don't get carried over, only attack turns!

Another source for rules that gave me this idea is the mobile Exploding Kittens game. The game has interesting type of cards called "Slap" (as a replacement for attack cards, functionality seems to be identical): 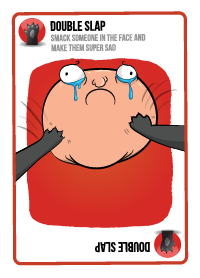 There are double slaps, triple slaps as well as single slaps and their behavior does seem to fit in with my answer:

Imagine you start the game by single slapping someone:

This is the behavior that you would expect according to my explanation but what if P2 slaps back?

That's precisely what happens in the game! It seems like for the rules to make sense you really need to differentiate between normal turns that happen when someone finishes their turn, and the forced "attack" turns that happen once someone gets attacked/slapped.

The game behavior and my explanation both match up with the "Double Slap" description as well:

End your turn without drawing a card and force any other player to take 2 turns in a row.

This is not the same as drawing 2 cards in a row! The target of this card should take their first turn (play cards and/or draw). When their turn is over, it’s their turn again.

Triple Slap works the same way as Double Slap, but adds 3 turns instead of 2.

This description matches my explanation as well!

Whether this is the correct interpretation of the rules or not is up for debate, but this was the one and only way I have managed avoid any logical inconsistencies while playing the game both in real life and virtually and reading different rules (old rules are even more different!).

Not the answer you're looking for? Browse other questions tagged exploding-kittens or ask your own question.