Who should I try to kill? Chandra or opponent?

Here's a board state I faced today in a casual Constructed game: 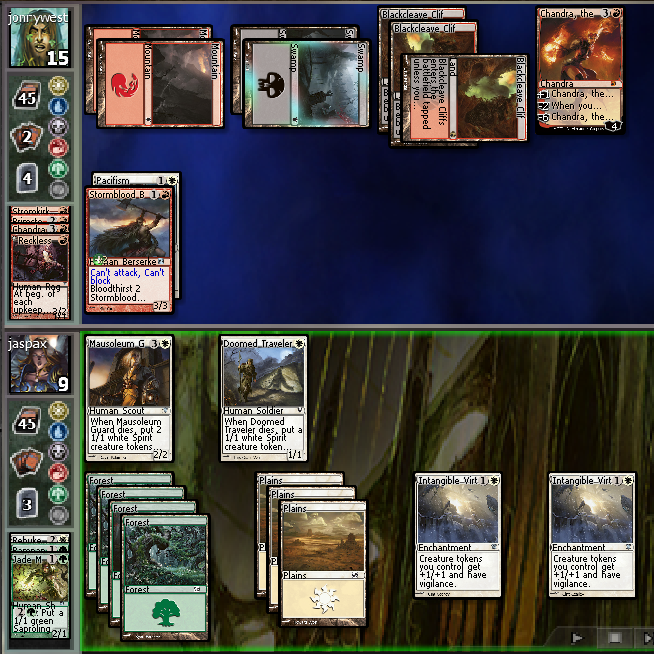 In case it's not clear from the picture, I have 1x Mausoleum Guard, 1x Doomed Traveler, and 2x Intangible Virtue, while he has 1x Stormblood Beserker (enchanted with Pacifism) and Chandra the Firebrand.

What's the play? Should I send my guys after Chandra or hit my opponent directly? And why?

What actually happened is this (spoilered for the curious):

1. I reason that, all else being equal, I'll grind him down on the ground before he can ping me to death with Chandra's +1 ability. I attack him, and he goes to 12. 2. He plays a Stormblood Beserker, pings me for one with Chandra's +1 ability, and passes the turn to me. I am now at 8 life. 3. I pass the turn back without attacking, planning on using men to block and upgrade them into flying tokens. 4. On his turn, he uses Chandra's -2 ability to double a spell. He then casts Incinerate targeting me, which gets doubled and hits for 6. Then he casts another Incinerate from his hand, and I lose. Should I have seen this coming? Should I have attacked Chandra to remove the threat of her -2 ability?

Depends on what's in the rest of your decks, really.

Just generally speaking, a five-turn clock is too slow to justify sacrificing board position.

I thought about ways to explain this in terms of drawing "outs", "control vs. beatdown" theory, &c., but I think it's actually simpler than that... Look at Chandra's -6 ability. 6 damage! If you race and both draw blanks, he will still win. With Chandra on the board, he actually has a faster clock than yours.

Consider also why he played her. What did your opponent do last turn? Looks like he played Blackcleave Cliffs tapped, tapped all his basics for Chandra, then +1ed her up to 4 loyalty counters. He did all that stuff based on the same board state as you're seeing now: two creatures and two Intangible Virtues. He had two other cards in hand; these represent alternative options. So, why'd he choose to make this play? Presumably he played Chandra because the best line of play available to him includes Chandra; therefore, you should kill her to cut it off.

Since I did just end up mentioning "outs" anyway, I might as well throw in "control vs. beatdown" theory. Assuming you're playing Township Tokens and his deck isn't heavy with big stuff like Inferno Titan, you've got a stronger endgame. In this situation, you've also got the ability to claim a stronger board position, by killing Chandra. So, be the control deck! Don't let him keep a planeswalker around just because ignoring her makes your super-slow clock a little bit faster.

I don't think it's even as complicated as the other two (perfectly correct) answers have suggested. You have no cards in hand and a mediocre board position. A five turn clock is a far, far cry from a one or two turn clock. Your opponent's burn deck has two cards in hand and a card that can potentially double up those cards - and with you on a tenuous 9 life no less! You are in real imminent danger of death at the hands of the planeswalker and there is no possibility that you should leave it unanswered, on the very slim chance that your opponent has nothing in hand and won't draw anything for five turns straight.

Seriously, this isn't even a close one. You are way behind in this game position and your only chance of regaining parity is to eliminate Chandra. Planeswalkers are generally must-answer cards and you need a really good reason not to worry about answering them. You have no such reason in the situation given.

I would absolutely have attacked Chandra. Here's the reasoning: You're correct that you will kill your opponent on the ground before he can ping you to death with Chandra, but Chandra's ping isn't the true threat you face here (otherwise, it wouldn't be any better than Curse of the Pierced Heart). Chandra is an enabler in the deck - in the board state you specify she can already double up on any spell your opponent might have in hand (and he has two cards in hand to your none), and the ping itself is an enabler for creatures like Stormblood Berserker (which you've already seen out of your opponent's deck at this point).

Most importantly, though, you're a long way from killing your opponent and you're in eminent danger yourself. Five turns (your current clock, at three damage per turn) might as well be forever, and that's assuming that your opponent draws no relevant spells. The short version is that despite having the seemingly-better board presence, you're actually behind in the board state as it stands (and arguably far behind) and Chandra is the most tangible threat you face at the moment; eliminating her is both much easier and more pressing than eliminating your opponent (which admittedly has to happen soon). As things stand, I suspect it's irrelevant, because I suspect you would have lost regardless (your opponent could still have pinged you with Chandra next turn, doubled-up on an Incinerate the turn after and just killed you with multiple burn spells), but I absolutely would have swung at Chandra and it's not very close.

1
What should Mono-B put in sideboard against GW-Tokens?
5
If I try to kill a face down creature, can my opponent save it by flipping it?
9
M:tG infinite loops: which actions are optional vs. mandatory? Is there inaction?
7
Mirrorweave on Double Faced Cards
13
Can I kill an opponent in response to lethal activated abilities, and not take the damage?
5
Chandra, Awakened Inferno vs Gods Willing
26
Am I required to correct my opponent's assumptions about my morph creatures?
1
Can an opponent kill Undercity Informer before you can sacrifice it?
1
What is the correct timing to play removal in order to stop a Niv-Mizzet + Curiosity combo?