Is there a method that gets beneficial diminishing returns when adding more dice, yet stays random?

Short Story: I want to find a dice system where multiple dice are rolled and compared at once, but rolling more dice is only slightly more effective than rolling fewer dice, while still being fairly chaotic no matter how many dice are rolled.

The formula right now involves starting at 5d6, getting a die each time you are hit, up to 10d6.

We ended up with an issue where it mostly became about dice-trading, where the victor was almost always the one with more dice, as well as the dice mattering more than the card itself. The cards ended up feeling like "placeholders" for stacking dice on rather than strategic choices to invest in.

What we really want is to have the system reward assigning dice to multiple things on the board, so that the game becomes more chaotic and stressful the later into the game it gets, not more predictable or even necessarily much easier for the player with more dice.

We've looked at rolling all the dice you would for a card, keeping your highest roll. The good thing about it was that it was relatively balanced, but it was far too predictable.

We've looked at exploding dice + keeping high, where you keep the highest value + any dice that match it. It was chaotic, but it basically ended up being an excessive "crit" system that we didn't like and wasn't easy to balance.

In case it helps, dice are colored differently for each player.

Does anyone know of a dice resolution system that can do this?

(EDIT) This is the RPG.SE question that turns the resolution method that solved this question (Roll high, add +1 for each match of that die) into an Anydice formula that can be reviewed.

The first question is simple. Take the highest X dice of a roll. Alternatively, set some threshold that you need to roll above, such as roll at least one six, or roll a total of at least 15. Under any of these schemes, as you roll more dice, you are more likely to have dice with better results, but there is a fundamental limit on how high you can go. In the case of highest X dice, your limit is X times the highest value on one die, and in the case of targets, the limit is a 100% chance of success.

By way of a simple example, let's say you use D6's, and you need to roll at least one 6 to succeed. Your chance of getting a 6 based on how many dice you roll looks like this: 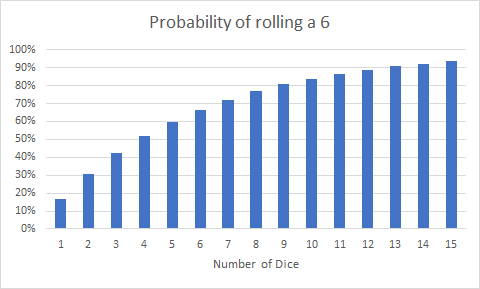 But while this satisfies your goal of the first question, it is directly contradictory to the goal of your second question. As you add more dice, the result gets more predictable. This is a general principle in probability; the more independent random events you aggregate, the lower the collective variance.

Given this, I believe that the answer to your second question is that "it's impossible without a re-framing of the question". Adding more dice will decrease the variance of the result, and therefore increase the predictability.

The way to re-frame the question is to not have all of the dice be the same. Here's a simple example, to illustrate the concept, though you likely will want to do something more complex.

You have two kinds of dice, white and red. White dice contribute to success, red represent risk. Each item, skill, etc can add some amount of dice, in one color or both. Most will add small amounts of white dice (1 or 2), but some better items may add larger amounts of white dice (3 - 5) but some red dice as well (1 - 2). Some skills could even do something non-roll related (like double the effect of a spell) but only add red dice. When you roll the dice, you take the highest three white dice... unless any of the red dice came up as a "1", in which case you treat the whole role as a 0. Through a system like this, you have to make trade-offs between getting increasingly marginal benefit from more white dice vs the risk of catastrophic failure from an additional red die. Maybe even have everyone roll 1 red die at baseline to prevent people from getting too powerful from stacking exclusively white die bonuses.

That's the type of idea you're probably looking for. Obviously you have to make it your own and fit it to your game. You can tweak the number of top dice you take. You could change the failure condition based on the circumstance. You could use different sized dice (D8s, D12s, etc.). You could add a third kind of die. The list goes on.

There's a lot of ways to weaken the effects of the dice.

How about "number of dice that show a 6", as is used in games like Neanderthal by Phil Eklund?

So you are more effective with more dice, but it's diminishing returns.

You can tweak the probabilities by requiring more 6s, or allowing 5s or 6s, etc.

You don't have to actually use all of the dice that you roll. For example you could be looking at the results of the best 3 dice of the 5 that you rolled.

Another limitation on it is you can limit how often extra dice can be rolled but keep a minimum amount around. Players can regain dice naturally over time or need to require them from some mechanic in the game.

This would allow you to roll more dice to get an advantage but not get a straight benefit from summing the total off all the extra dice and can even make it a little more risky to roll more if you get back luck.

For every x number of dice, one of them e.g. a different coloured one, counts negative to the total. It's still random and won't have a huge impact if x is set sensibly.

You might also consider having good and bad results from a roll. For instance, Blades in the dark uses d6, but a 1 is a failure, 4-5 a success, and 6 a crit. But if you have more fails than successes (critical or otherwise) it's a critical failure. Otherwise every fail cancels a success. More dice is generally good, but it's possible to fail worse as well as succeed better. Add in bonus/malus dice (which remove the worst or best rolls respectively) or DM/Player Rerolls and more dice isn't always good. Especially if a reroll affects ALL rolls of a particular number.

I think the key would be finding some interaction that gives bonuses.

At higher tiers you could give bonuses for pairs, mini-straights, and straights. And obviously the more dice you add, the more powerful these bonuses become. For example, upon reaching 7d5 you are guaranteed a pair (although, you were almost virtually guaranteed a pair before...)

Ask yourself what can you do with the dice you have already? Could you make one of them a different color that acts as a bonus die what special interactions? If you pair your bonus die you get +3?

Have a set number of dice per roll: say, 10 or so. Rather than cards giving you more dice, they give you more rerolls. Playing 5 rerolls worth of dice lets you reroll five die.

If you want to make it more tactical (that is, more microdecisions required), start with 5 dice per roll. Cards may either give you rerolls or additional dice (with additional dice generally more rare/valuable than rerolls), or some combination of the two.

Not the answer you're looking for? Browse other questions tagged game-design dice probability mechanics .

13
In backgammon, can you resign, and how can you tell when you should?
9
Resolving Diplomatic actions in a RISK-style board game
4
Risk (revised edition 2008): Is it better to roll 1 or 2 Defense dice with the Bonus Defense die Major Reward?
2
Use exactly 36 combinations instead of two dice
2
Strategy for Yahtzee
12
Fairness of Cowry Shells as Dice
24
Where is this six-sided die from
0
Is there skill in rolling a spinner?
2
What is the optimal strategy for deciding dice to reroll when trying to reach a target value?