I've been learning to play Go for the past few days, and in this game I'm playing I don't understand exactly how I captured the whole board in one move. These images show what happened. 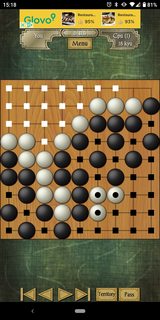 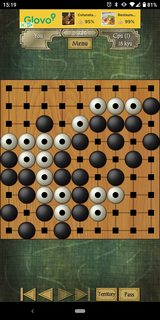 A corner invasion can in some cases can make a huge difference. In this case the play on th 3-3 point threatens to cut the white group in the upper left into three pieces, two of which have no chance at life and the third is in bad shape.

That siad, I think the AI is a bit premature in declaring all these stones dead. A play by white to connect at the 4-3 point or to undercut at the 3-2 point could lead to life for at least the largest part of the white group, depending on the further line of play by both players. I am not an expert (I was about 10 Kyu at my best, years ago), but I would not concede with the white position after this move,

I agree with the comment that a larger board size may avoids tactical oddities with this AI.

Addition: A comment by @ilkkachu points out that in the 2nd image it is black's turn, not white's, Given that, white doesn't seem to have much chance. If as the comment suggests black extends to the left of the previous store, ther does not seem a plausible line for any white group to form eyes, assuming reasonable play by black. I had incorrectly read the 2nd image as white to play, that makes a sizable difference.

17
How does the full-size board change the game of Go?
8
How to begin learning Go?
2
Go - How does one count territory in these two scenarios? (9x9)
10
Why is this move considered bad?
5
Go: How is a “suicidal” move that captures enemy stones handled?
3
How would this seki be scored at the end of the game?
1
In Go (board game) under Chinese rulings how does the scoring of empty territory work?
6
Mysterious move
2
How many stones for small go boards?
3
Can anyone explain the last move on this go board