How to bid and make a slam with 28 HCP between the partnership? 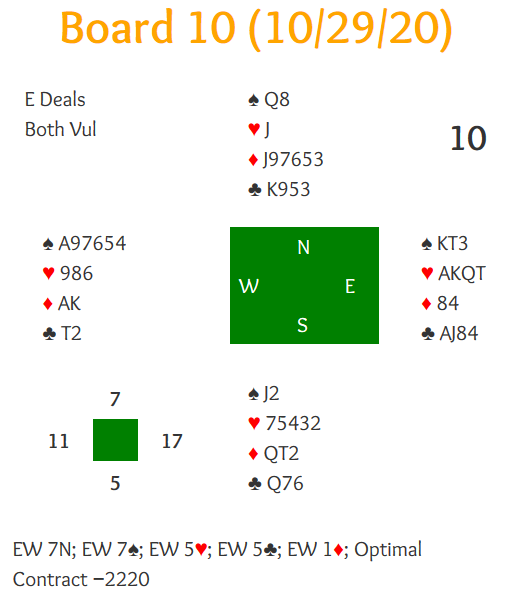 The Common Game recently had this board in which the East-West pair usually ended up bidding and making a game contract of 3NT or 4 spades. Only 3 pairs of almost 1,000 bid and made grand slams; 42 pairs bid and made small slams. The question is, "How would you bid a slam with this hand?"

The answer is; you don’t. Not with normal 2/1 methods, anyway; and even pretty out there methods would have a hard time finding this.

Why? Because it’s dependent on so many things. The seven card heart fit AND the short jack. The spades splitting 2-2, or guessing the finesse. The partnership has only eight top tricks, and the rest depend on distribution. In NT even a small slam is risky if you get a club lead! No one would bid the grand knowing even every card in both hands for EW - you need 70% to bid a grand and you won’t get that here (hearts are 61% and spades are 46% roughly between the length and the finesse possibilities, so the grand is about 30-35%, plus some small chance for a club trick with a squeeze). 6S is probably the ideal bid double dummy (only the spade split is really a problem there, hearts don’t matter, and extra chances appear in clubs).

A normal 2/1 auction is simple here.

Some would bid 3NT instead of 4S, and some would leave it there. Some have ways of showing really good spades (superaccept), though KTx feels borderline to me for that. Could the spade hand see the slam? I guess? But 28 points and pretty average distribution beyond the one extra spade isn’t super exciting.

Some bidding systems are very control oriented very early on, for what it’s worth, and would find most or all of the eight trucks in the early going plus the space fit. Things like this precision system would have a shot at the small slam I think.

Don’t assume that the few hands that bid the best score did so by being smarter than everyone else. Usually it’s that they were more risk-taking than usual, or misstated the strength of their hands, and got lucky. But for every top they get for this kind of thing they get four or five bottoms when they’re down 2 in grand slam and everyone else is making 4S+1.

Here are two auctions that aggressive bidders could use to reach a small slam, using common methods in a 2/1 base system:

For pairs that play Texas transfers, a 2-level transfer followed by a jump to game is a mild slam try with a 6-card suit. W chose to make a mild slam try with excellent controls; this was a bit aggressive. E has a control-rich maximum with good trumps, so is clearly right to bid on.

Here, E has been the aggressive bidder, while W has bid normally. 3D may be part of new minor forcing or Wolff signoff, both of which use 3D to ask about opener's major-suit holdings. After the fit was found, W showed a diamond control and denied a club control. E, having the other two suits controlled, checked on key cards and placed the contract.

Note that both of these auctions are quite aggressive though not outside the realm of reason.

As noted in Joe's answer, the grand is quite bad. It requires picking up the spade suit (two-two with split honors, half of QJ tights, and half of stiff honors is about 47% a priori) and avoiding a club loser (hearts are stiff J, Jx, or Jxx in either hand, about 61% a priori, or a small chance of a stiff club honor in the hand with short hearts to provide the opportunity for a squeeze). You can't quite just multiply the a priori odds to get the probability of both things coming home, but you wouldn't be far wrong if you said that the grand is something like 25%.

As others are saying, it's a 5-or-7 hand; if you can pick up the spade suit (which has some luck involved in real life when it's 3-1 with stiff honour than double-dummy) you make everything when the heart J drops in three rounds; if you can't pick up the spade suit, the club lead will mean you lose two tricks. 5-or-7 hands are the ones you never want to see; if you missed slam, you want it to fail, because if it makes, you're losing to all the slam bidders; if you're in slam, if it fails, you get an almost shared zero. And in the case where the spades are Qxx-J (or Jxx-Q), it's even more fun, because now everyone who plays the wrong top honour loses to everyone who played the right one (and then plays Restricted Choice, which is 3-1 here) - in game or slam.

Having said that, I'm not surprised that slam was few and far between, and I agree with other answers that those in the grand almost certainly got there on a bad auction (probably using 4NT "we might have slam, partner", and then 5NT "we have all the aces, so I have to find out how many kings", then bidding the grand missing one (was the long suit not mentioned?) Keycard would have found the missing Q, and definitely bidding seven off the trump Q and a K is a bad idea.

Having said that, these hands are what strong club systems were built for; assuming no interference (and I wouldn't guarantee that, either hand), mine would likely go:

First of all, there is no reasonable way to bid "seven" with these hands. One test is that only 3 pairs out of 1000 did it; the other test is in the last paragraph below. So the issue of bidding "slam" really refers to a small slam of "six."

As it were, a "random" nine card fit with 28 high card points is about "even money" to make a small slam. There are several important features of these two hands that make the actual odds decidedly better than 50-50.

The two hands could actually make seven, because it was possible to drop the opposing jack of hearts, either with an opposing 3-3 split, or having the jack on the short side of 4-2 or 5-1 split. This is slightly better than a 50-50 chance, but not good enough odds on which to stake a grand slam. For this, you actually need two chances out of three (e.g. a 3-2 split in your key suit), because you lose both a game and a small slam bonus if you bid a grand slam and fail.

4
In bridge,should a responder devalue her hand if short in opener's suit?
3
Is there a reasonable suit preference signal on this lead?
11
Does it make sense for a defender to lead a short major when opponents fail to find a fit using Stayman?
1
Was a bridge column "resulting" when it criticized an opening lead?
0
How to make a small slam in bridge with less than 30 points between the partnership?
2
How to make a small slam in bridge with only 25 high card points between the partnership?
4
In Bridge what happens if a player has more points than their bidding suggests
1
Is it correct to play defensive high-lo or "echo" with two small honors?
6
How to bid a slam when partnership cannot find the best suit?
0
Was I right to expect my partner to respond 2NT in the following situation?