Can player floop Ancient Scholar when no Rainbow cards in their discard pile?

FLOOP >>> Return a random Rainbow card from your discard pile to your hand. If you control a Building in this Lane, gain 1 Action.

Is it valid to FLOOP him when there is no Rainbow cards in discard pile? If yes, what does happen in this case? 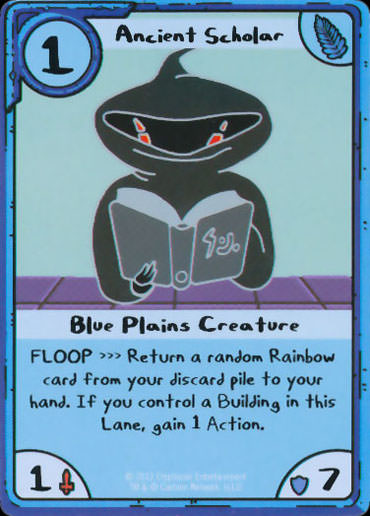 Yes, player can FLOOP Ancient Scholar even if there is no Rainbow cards in their discard pile

In this case they fail to return a random Rainbow card to their hand, but still can gain 1 Action (if control a building in the lane). This is explained in detail by Matt Hyra at boardgamegeek.com forum: Flooping without fulfilling ability?

According to the explanation, the general rule is

you may always Floop if the ability doesn't target anything. If it requires a target, you must have a legal target before you can Floop

Not the answer you're looking for? Browse other questions tagged card-wars or ask your own question.

2
Does Travelin' Farmer deal damage when owner replaces him?