In Duplicate Bridge, does the person holding a particular set of cards open the bidding in all times that particular deal is played?

Say the same deal is played by 5 different pairs of people. Is the person opening the bid each time that particular deal is played have the same set of cards in his hand? Or is the dealer/opener also changed?

See this picture from wikipedia: 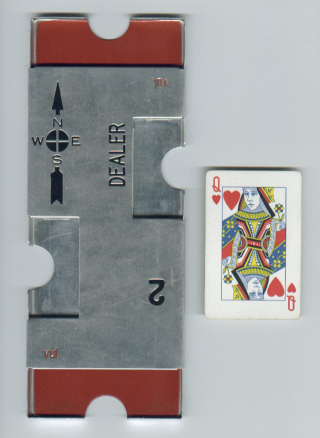 The red sides indicate Vulnerable, and the dealer is marked as well. Here NS are vulnerable and E deals. It will be played that way at each table. Board 2 always has that configuration every time you play anywhere, as would board 18 and 34.

Not the answer you're looking for? Browse other questions tagged bridge duplicate-bridge .

3
Does one need to bid Stayman with a flat distribution?
2
In rubber bridge, when should you "lead your partner's suit rather than your own?"
2
How high do transfer bids (to 1NT) go?
1
Does a light fourth seat opening work on the same principle as fourth seat "balancing?"
0
If you are fourth seat after a third seat raise, can you make a takeout double with "intermediate" values?
2
What adjustments do good bidders make for seven card fits?
0
Can "quick tricks" be a guide to defense in bridge?
0
If your partner opens with a "pass," does that make you the "captain" in a bridge partnership?
2
If you are opening "light" in third position, would it make a difference which is your strong suit?
1
Is it OK to make a takeout double with 14 high card points and bad distribution, but no "stranded" honors?