Can you be sent to Reading Railroad without passing Go?

In Monopoly, there is a Chance card that reads :

Take a ride on the Reading. Advance token and if you pass Go, collect $200

Given that there is no legal way that you could reach Reading Railroad from a Chance square without passing Go, why is it specified on the card?

Is there a historic rule that may have changed ?

There are 2 cases that explain the wording of this card. These cases reveal that it is possible to be sent to Reading Railroad by a Chance card from a square other than a Chance square.

According to World of Monopoly, these (first?) four versions of Monopoly contained this Community Chest card : «Pay $10 fine or take a Chance» 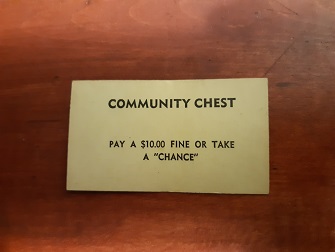 This means that you could be sent to Reading Railroad by a Chance card from the Community Chest square between Mediterranean Avenue and Baltic Avenue, and NOT pass Go.

According to EnAcademic.com, this Community Chest card has been omitted from the US editions since 1936.

Again, according to World Of Monopoly,

«Curiously, the rules of this game (in English and French) contain a provision that a player rolling a 3 may take a Chance or Community Chest card instead of making his move.»

I remember playing with this rule in the 1950s, but I always remembered it as a house rule. It appears that it was official, in Canada.

Therefore, if you rolled a 3 while on Mediterranean Avenue, Community Chest(1), Baltic Avenue or Income Tax, you could elect to not play it, take a Chance card, and be sent to Reading Railroad by that card, without passing Go.

In either case, it would be possible to be sent to Reading Railroad, by a Chance card, from a square other than Chance, and not pass Go. And that is why the phrase «... if you pass GO, collect $200» was required on the Chance card in those days. The phrase just was not dropped when no longer required.

It's just following standard templating for cards that move the tokens.

Perhaps the designer(s) felt alternate wordings would be unclear (perhaps lead to people trying to collect $400 or not collecting at all).

34
If you pass GO, do you collect 200 at the end of the turn or as you pass GO?
13
Advance to GO, collect $400?
4
in monopoly do you collect 200 if you get sent to the nearest trainstation or fleet street but the card doesn't state collect or do not collect on it
14
Can you buy a property after being sent by a chance card?
30
Where do you go for the 'nearest railroad' in Monopoly?
4
Chance card in monopoly
3
Do you move forwards or backwards on the King's Cross Chance card?
1
Monopoly Chance Card
0
Do you lose additional turn if sent to jail by Community Chest?