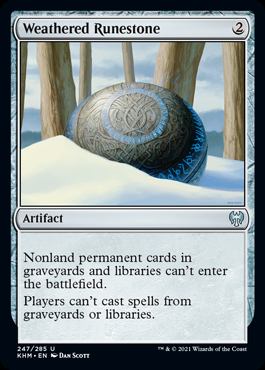 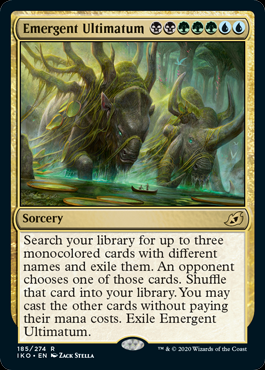 No, Weathered Runestone does not interact with Emergent Ultimatum. The Ultimatum allows its controller to cast the searched cards from exile, not from a library or graveyard.

As Weathered Runestone says, it prevents casting spells from graveyards or libraries. This applies to e.g. Skyclave Shade and Vivien, Monsters' Advocate. Its first ability also applies to, for example, Genesis Ultimatum and Eerie Ultimatum.

601.2. To cast a spell is to take it from where it is (usually the hand), put it on the stack, and pay its costs, so that it will eventually resolve and have its effect. [..]

However, Emergent Ultimatum puts the searched cards into exile first, which is a different zone.

400.1. A zone is a place where objects can be during a game. There are normally seven zones: library, hand, battlefield, graveyard, stack, exile, and command.

The controller of Emergent Ultimatum then casts those cards from exile, which Weathered Runestone does not prevent.

While Hackworth has already answered this question, the rulings on gatherer also address this situation:

If an effect exiles a card from a graveyard or library and allows a player to cast it, the player may do so. The spell is cast from exile.

5
How exactly does Xenograft work, and not work?
7
How does Void Winnower affect face down spells and creatures?
15
Will transforming Thing in the Ice with a token-summoning spell bounce my tokens?
4
Does a triggered ability with no legal target for only some of its targets make it to the stack?
4
Does Saheeli Rai's (-2) targeting Riddleform make a creature?
11
When does Myr Superion check the source?
3
Does the mana ability restriction of Pithing Needle refer to the cost or the effect of an activated ability?
5
If I “play” a card, does it count as casting it?
13
Does Mutate count as an alternative cost?
15
Is there a Magic card that rearranges the stack?