Can Ghired, Conclave Exile and Helm of the Host go infinite?

So in a Commander match a buddy threw down Helm of the Host and Ghired, Conclave Exile. He attached the equipment to his Commander and swung out. Given the cards' rules texts, what goes onto/off of the stack and does this interaction would result in an infinite combo? 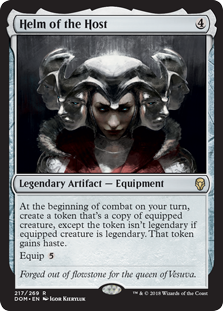 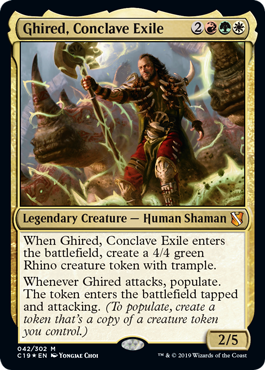 This is not an infinite combo

Here are the relevant steps, in order:

1 You could in theory populate the Rhino, but why would you want to?
2 This is due to how copy effects work. Copy effects only copy the "copiable values" of the permanent, which is generally the original text of the card as modified by copy effects themselves. All other affects (e.g. "target creature gains flying", "target creature gets +1/+1") are ignored. On Helm of the Host, the removal of the Legendary supertype is part of the copy effect, while Haste is granted afterwards. Therefore the lack of Legendary is copiable, but the Haste is not. This isn't particularly relevant, because haste only affects whether the token can be declared as an attacker, and entering the battlefield tapped and attacking skips this step (which is the same reason you don't get more tokens).

Incidentally, Magic tries to avoid permanently granting abilities through static effects, as this creates memory issues. But they sometimes make exceptions for haste on wordy cards, with the theory being that haste is only relevant for one turn anyways. But it's worth paying attention to if you're facing down a Gingerbrute or dealing with Control Magic.

Each turn you can more than double the number of Ghired creatures you have, and gain 4/4s from his enters the battlefield, but the populate abilities on those new tokens will not trigger. This is covered by rule 508.2a and 508.3a of the comprehensive rules (emphasis mine):

It is also in the rulings for Ghired on gatherer (emphasis mine):

Since the tokens were not declared as an attacker, but forced in attacking, the populate does not trigger.

No, there is no infinite combo here.

However, these populate tokens do not trigger their own attack abilities, only the Helm token does. A creature that enters the battlefield already attacking has never actually been declared as an attacker because it has been created after the declare attackers step. Therefore it doesn't trigger any abilities that trigger on attack, which is necessary for the populate to happen.

The 5 steps of combat are:

Effectively, you can create x+3 Ghired tokens per attack, where x is the number of Ghired tokens you already controlled before the Helm trigger. That will of course grow quickly, but not arbitrarily quickly.

23
Do creatures that enter the battlefield at the same time see each other enter?
3
Who is in charge of knowing abilities of blockers and attackers?
2
Portcullis triggers
4
Reasoning for Soul Warden and Ajani's Pridemate interaction
5
Do Combat Celebrant and Helm of the Host give me infinite combat phases?
2
Helm of the Host on Rakdos the Showstoper
6
How to calculate the power level of a Commander deck?
0
How do Butcher of Malakir and Extractor Demon interact with Barter in Blood?
3
Can you stop all attacks with Pramikon and Helm of the host?
1
What is the correct timing to play removal in order to stop a Niv-Mizzet + Curiosity combo?