Ward, the new keyword introduced in Strixhaven, counters spells and abilities that target that creature unless you pay a cost.

Ward {2} (Whenever this creature becomes the target of a spell or ability an opponent controls, counter it unless that player pays {2}.) 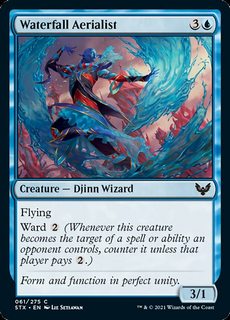 Whenever a spell or ability you control counters a spell, you may draw a card. If you do, discard a card.

Does the Ward keyword count as an ability for the purposes of Baral's draw ability?

Yes, this is confirmed by the Strixhaven mechanics guide:

Ward is a triggered ability.

More generally, a triggered ability is defined as (Comprehensive Rules 603.1):

6
Does Seeds of Strength trigger Heroic three times?
7
Can abilities that trigger when a permanent becomes targeted trigger multiple times from the same spell?
2
How do continuous effects interact with the stack, your hand, and other zones?
4
Will countering a spell that left the stack still trigger abilities?
2
Does Awakening of Vitu-Ghazi trigger the ability of Kiora, Behemoth Beckoner?
5
Does Curator's Ward trigger when a creature it enchants and Curator's Ward get removed at (seemingly) the same time?