How can we interrupt the Witherbloom Apprentice and Chain of Smog combo?

A friend of mine was discussing the Witherbloom Apprentice and Chain of Smog combo (pictured below).

I was wondering if it would be easy to interrupt the combo easily, since Chain of Smog is a sorcery.

Also let's say I played a card with Split Second such as Krosan Grip, targeting a random artifact on the board that has nothing to do with the combo. Since Split Second prevents any spells from being put on the stack, would this prevent my opponent's Chain of Smog from going on the stack? Or would this not work, since the spell is being copied, and not being cast? 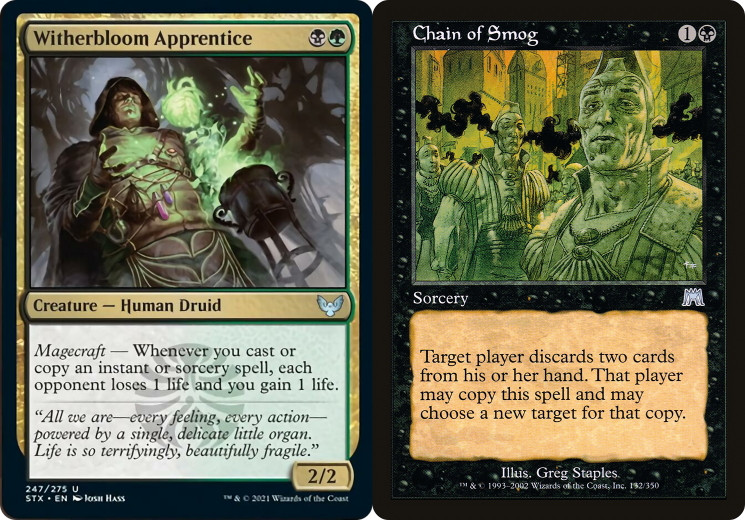 You can interrupt this combo with any instant or ability that removes the Witherbloom Apprentice or counters the Chain of Smog.

The most important thing to see here is that the copy of Chain of Smog is created as part of the resolution of the spell. The player it's targeting can't create the copy whenever they want, while the spell is on the stack. The fact that it's a sorcery is irrelevant. So, Pongify will work, because its an instant that removes the Witherbloom Apprentice.

On the other hand, Split Second on Krosan Grip is irrelevant here. Sure, while it's on the stack, the opponent won't be able to do anything else, but after it resolves, the Chain of Smog is still on the stack, and the combo still works.

What causes the combo to end isn't timing rules, but the removal of either part of the combo. Chain of Smog makes a copy of itself as part of the resolution, and that copying effect does not have the same timing rules as casting a spell.

Remember the stack is LIFO - Last In, First Out. And until the Chain of Smog is on it's way out, meaning it's the top of the stack, it isn't going to copy.

Not the answer you're looking for? Browse other questions tagged magic-the-gathering mtg-stack .

4
Does the first spell from Possibility Storm go on the stack before being exiled?
2
What is the safest way to approach discussing a prize split?
2
When is a Spell considered to be "Cast"?
2
When a spell targeting a creature with heroic gets countered, does heroic still trigger?
8
How can a Morph ability counter split second spells?
5
If I flash in Teferi, Time Raveler, can its passive ability counter a spell on the stack?
21
Can Veil of Summer force an opponent to target their own creatures with Swift End when Lucky Clover is on the battlefield?
1
What is the correct timing to play removal in order to stop a Niv-Mizzet + Curiosity combo?
1
Was it possible to target spells placed at the bottom of a just-cast fast effects chain?
3
How does casting a spell while casting a spell affect priority?