Unstable Unicorns - what is the definition of "effect"?

There is a card 'blinding light' that says 'all your unicorns are treated as basic unicorns with no special effects' - But what is a special effect? The rules define obvious words like "draw" and "play" but not "effect".

For example, 'annoying flying unicorn' has the text:

When this card enters your Stable, you may choose a player. That player must DISCARD a card. If this card is sacrificed or destroyed, return it to your hand.

(I have a friend who says the second part is not an effect. Therefore if I play 'blinding light' and then 'unicorn poison' on her card, she gets to put the card back in her hand. The reasonings are many - there is an element of choice in the second part, or because the card is no long in the stable, or maybe because it is the third sentence in the card. Point is, 'effect' is not defined.')

So can anyone define 'effect'?

Blinding Light treats your unicorns as if they have no text on them at all, except "Basic Unicorn." So if the Annoying Flying Unicorn is sacrificed or destroyed in your stable, it just gets discarded like any other dead unicorn. When you play a unicorn into a stable that already has Blinding Light, it does nothing – just like a Basic Unicorn.

When I looked up Blinding Light, I found this image, which has much less ambiguous text: 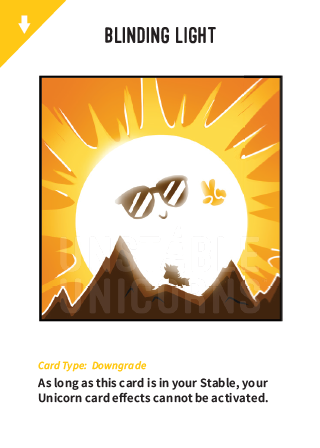 No mention of "special" effects, just all Unicorn card effects, i.e. all of the text at the bottom of a Unicorn card. (If your Unicorns were all Pandas, they would be unaffected by this card.)

Not the answer you're looking for? Browse other questions tagged unstable-unicorns or ask your own question.

4
What are "triggered effects" in Unstable Unicorns?