Can “Fling” target a Player?

If I cast Fling, can I deal damage to my opponent equal to the sacrificed creature's Power or does it only target Creatures/Planeswalkers?

The rules say (emphasis mine):

115.4. Some spells and abilities that refer to damage require “any target,” “another target,” “two targets,” or similar rather than “target [something].” These targets may be creatures, players, or planeswalkers. Other game objects, such as noncreature artifacts or spells, can’t be chosen.

So yes, if a spell says "any target", a player will always be a legal choice (assuming no other cards currently in effect restrict whether players can be targets).

Look at the original printing for fling: Back then Planeswalkers didn't exist as a card type, spells that were meant to be able to target anything (that could take damage) had the wording "target creature or player". Fling was one of them.

When planeswalkers were created in Llorwyn block, the rules were created to allow damage to be re-directed from a player to one of their planeswalkers, so anything that could target a player could in a round-about way hit a planeswalker. Fling could be used this way too, targeting the player and announcing you were using the damage redirection rule.

In 2018 with the release of Domninaria, Wizards made a change to their rules and card wording, they removed the damage redirection for planeswalkers and errataed many cards to add the ability to target planeswalkers directly. Fling was changed at this time to replace "Target creature or player" with "any target" and as the rules state, any target includes players:

115.4 Some spells and abilities that refer to damage require “any target,” “another target,” “two targets,” or similar rather than “target [something].” These targets may be creatures, players, or planeswalkers. Other game objects, such as noncreature artifacts or spells, can’t be chosen.

Andrew's answer is an excellent overview of the history, but I want to go one step further back, all the way to Alpha: 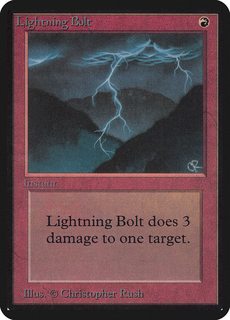 Back in the earliest days, burn spells would damage "one target" or the like, which implicitly meant "one target that can receive damage in a meaningful way" (that is, creatures and players; enchantments don't have toughness or life, for example, so it wouldn't make sense to damage them).

Later, the Oracle wording was changed to make it explicit that this meant "target creature or player", and this is what we see in e.g. Fourth Edition: 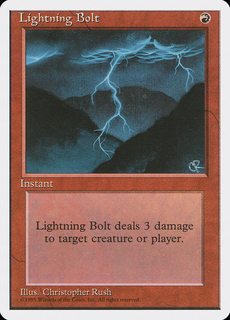 As Andrew explains, Lorwyn added planeswalkers as a new permanent type that could be damaged, but to keep things working intuitively they weren't damaged directly: damage would be dealt to the player, and then redirected to the planeswalker. So instead of using Lightning Bolt or Fling on Jace, you'd target their controller, then redirect to Jace.

The problem was, this led to some weird unintuitive results when combined with other effects (like Runed Halo, or players having hexproof, or effects that meddle with damage redirection). So in Dominaria, the rule was amended: now planeswalkers could be damaged directly.

Except this led to a new problem: "target creature, player, or planeswalker" was long and made the text of burn spells unwieldy. Their solution was to go all the way back to the Alpha text, and define "any target" to mean "any target that can be damaged in a meaningful way" (that is, creatures, players, and planeswalkers). 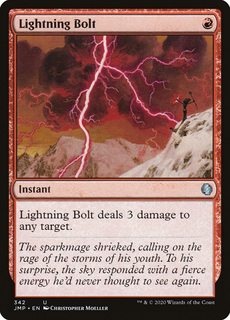 Fling deals damage equal to the sacrificed creature's power to any target.

A player is a valid target, so yes, you can damage your opponent(s). This is no different from, say, Lightning Bolt, the classic burn face spell.

You can. This comes up often in the Pauper format, when you play Affinity. You play lots of artifacts, including all your lands, and some Atogs. 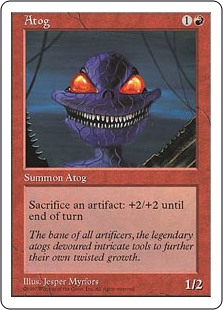 3
How would Master of the Wild Hunt be worded if it targeted multiple creatures?
2
Pandemonium and Muscle Sliver
9
Can older cards that refer to a player/opponent ever be used on planeswalkers?
3
Is Flesh Allergy combined with Grave Pact counterproductive?
8
Does first strike damage occur before normal damage?
2
Casting Fling on a Creature Token
5
Can a “flung” creature that is destroyed still deal damage?
3
Can a single event trigger more than one triggered ability?
4
Nature's Way ability clarification
4
What is the Fling interaction with Removal?