What board and card games have full-time professional players?

Can we provide a listing of what board games or card games are played by full-time professionals? I define such a professional as someone whose income arises primarily from competing and winning events (against other competitive players, rather than against a stable benchmark like a casino for example) and/or teaching (so, for example, a full-time coach who hardly ever plays competitively still counts). There don't need to be many - if it's possible to confirm even one such full-time professional that is enough to mention the board game or card game.

So far I am aware of:

And possibly Shogi, Xiangqi, and Bridge, though confirmation on these would be valuable. Can anyone add to this list?

EDIT: Since this question has been reopened I will offer some further thoughts that I felt evolved from our discussion. They could be useless to someone who has already researched this and knows better:

Obviously an extremely incomplete list but maybe a few possibilities that occurred to me to start brainstorming. There may be some other board games (I just don't know enough about the field to even know any names besides maybe Monopoly, Scrabble, Risk) and of course whole fields I'm ignorant of, like how trading card games produced a new positive example in MTG (see answers below).

There are a number of Magic: the Gathering players who derive all their income from the game, whether that be:

The split between those sources will obviously vary between individuals, with others supplementing their Magic-related income with "regular" employment.

[ Update four days after I wrote this answer: Wizards of the Coast have canned their professional contracts... ]

While it may be strictly off-topic for this site as it doesn't have a physical version, I believe there are also Hearthstone pros who earn a living in a similar manner.

I won't give a list since a list will keep changing. Rather, I'll give a method to find these games.

Go to https://www.twitch.tv/, which is the most popular platform used by streamers to stream themselves playing games. Go to the categories section, and sort all categories by viewer count. If we agree that the games most likely to have full-time professional players are also most likely to have people streaming the game (seems reasonable, since these games are necessarily popular, and popular games have more streamers), then you should be able to find all the games that fit your criterion here.

You can further sort by Card & Board Games if you like (although for some reason chess isn't considered a card & board game by Twitch).

Note this methodology isn't perfect - a major tournament for one game for example can greatly inflate the viewer numbers while it is in progress, making it seem more popular than it actually is. I have not tried to see if Twitch stores the rolling 30-day average or similar of viewer data, but if that's available it should be helpful.

Similarly, because (as far as I know) Twitch is English dominated, games in which the majority of players don't speak English, like Xiangqi, might not be represented. Therefore this method would only give you a list of candidates. You'd have to do further digging to confirm if they actually support full-time professional players. 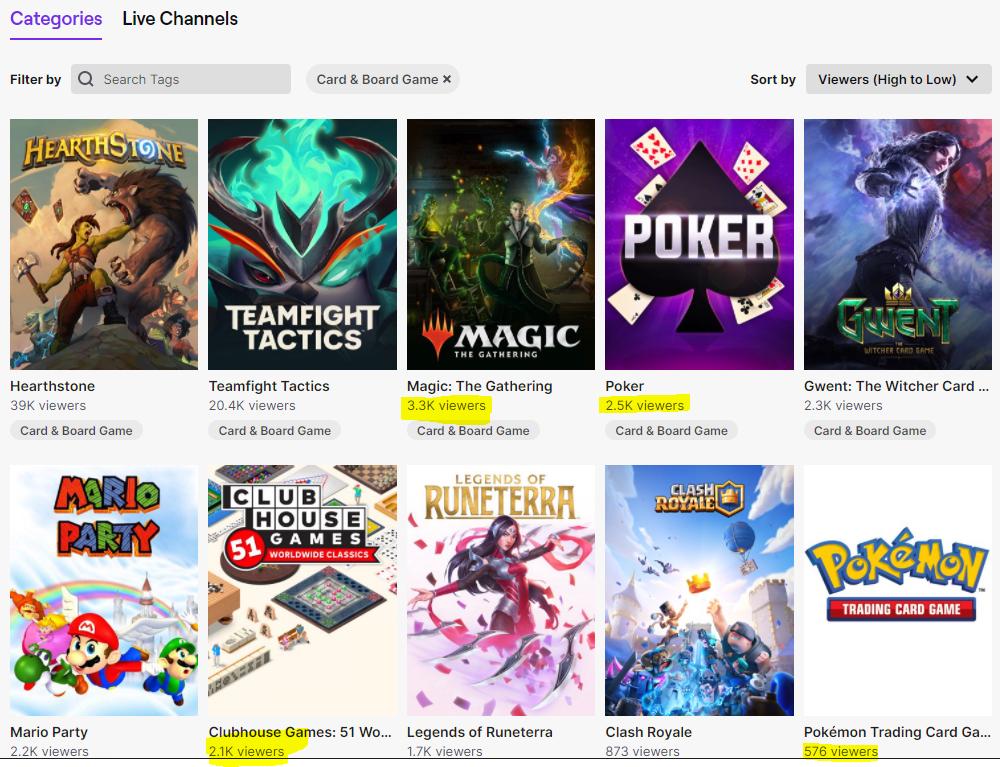 Not the answer you're looking for? Browse other questions tagged recommendations tournament professional .