I am searching for a book that contained a playable board game within its pages.

In the UK in the late 1980s, many schools participated in the Puffin Book Club, where pupils could buy at a discounted rate from a monthly selection of books by Puffin (Penguin's imprint for kids). I'm not sure, but I think that other, non-Puffin books were included in the selection as well.

I remember getting a large-format paperback book about astronomy and space science (quite similar in style to the Osborne books), possibly focusing on our solar system.

I can't find a back catalogue of Puffin books online, I'm not even sure it was a Puffin book, and the title could have been almost anything containing "space", "astro" or "solar", so finding it is a pretty tough task. I'd imagine it's likely it may have been republished internationally as well, so I'm hoping it may seem familiar to someone somewhere.

About the board game

The book included four (I think) board games, each of which took up a double-page spread in the book, where the board and rules were printed across the two pages. I'm not sure if you just drew the pieces on paper yourself, or if they were supplied in pull-out form.

The only game I remember was themed around mining in the asteroid belt. There was a large circular track of locations occupying most of the double-page spread, representing the asteroid belt, and there were pieces for the asteroids Ceres, Pallas, Juno and Vesta. Each turn, you would advance each of the asteroid counters one space around in its orbit. Each player also had a spaceship counter, which you would move slowly between the asteroids as you collected minerals by mining.

SE suggests "Solarquest" as a related topic, and the theme and ideas seem similar, and I suspect this game was influenced by Solarquest, but it's not the same thing.

I'm pretty sure this is the game "Space Pirates" from Battlegame Book 3: Galactic War. It's an Usborne book from the 1980s. The book does indeed contain four games. 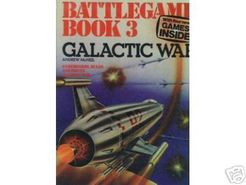 There is a detailed review here.

This is a game of mineral prospecting in the asteroid belt. In other words its a 'fetch and carry' type of game in which you pick up natural resources from the major asteroids and deliver them back to earth. The game is set in 2076. This probably seemed a safe bet in 1975, although the current NASA finances leave the prospect a little more shakey. The game was not designed by series author (and Kingmaker designer) Andrew McNeil, but by Dave Rotor. He had (I learn from his BGG page) previously put out an SF tabletop game called 'Galactic Warfare'.

The game requires players to collect one resource token from each of four major asteroids- Silicon from Ceres, Zirconium from Juno, Titanium from Pallas and Magnesium from Vesta. 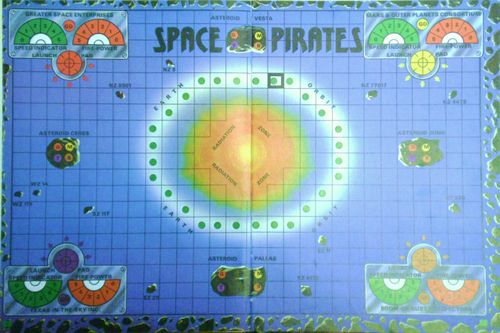 2
Game With Space Battles
3
Board game that you set up each time differently with little cards
5
Space version of a monopoly like game?
9
Looking for name of very old board-type game
9
Board game about setting fairy tales right
5
What board game for 2 to 4 players with 1 token each and the winner is the first to the top of a raised platform?
4
Simplistic Area Control Board Game with Discs