A tournament chess game with board sides reversed. Will it be considered valid?

I think I've already asked this question earlier. No answers were received and I was told my question makes no sense at all. I disagree though. I think it has good sense and is pretty clear. 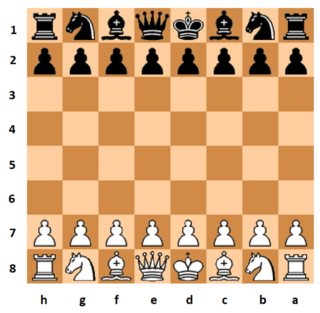 Imagine two players who decided to play a chess game. They arranged the initial position. The white squares h1 and a8 are at the respective player's right—that's totally correct. Queens occupy squares of their respective colors—that's nice, too. However, the white pieces occupy ranks 8 and 7, and black pieces occupy ranks 1 and 2.

My question is: if it's a serious tournament game, would it still be considered valid? I.e. no penalties from the arbiter, game fully played until checkmate or resignation, and score submitted.

Yes, the game is valid. The official rules don't say anything about coordinates alongside the board; as far as the rules are concerned, they don't exist.

A similar case, where the board is rotated by 90 degrees (which causes each square to have the wrong color), is mentioned:

7.2.2 If during a game it is found that the chessboard has been placed contrary to Article 2.1, the game shall continue but the position reached must be transferred to a correctly placed chessboard.

but even then the game is still valid.

Your question really boils down to this: what if you played a chess game exactly according to the rules in every way, but you gave the squares funny labels? Maybe they're labelled 0-63, or with roman numerals, or... . Obviously that's a silly question. You're fooling yourself by having this funny process that seems to coincidentally and unexpectedly place every piece in the exact spot it should be, and by saying "but what if we also make a big deal of writing those funny labels on the board ahead of time?" But deep down this is the same as asking "if you play a game of battleship but say all the pieces are airplanes, is it still battleship?"

The play of the game obviously doesn't depend on the square markings; it depends on the piece moves and the captures and threats due to those moves. As long as the pieces are oriented correctly relative to one another, it wouldn't even matter to game play if the board has different colored squares (that is, you could play chess perfectly well, with a little care relative to bishop and queen moves, on a sheet of graph paper).

For record keeping purposes, it would be trivial to correct the move record in the above situation to the correct board orientation (i.e. white on ranks 1 and 2), by reversing the order of ranks and columns -- it could be done programmatically in a spreadsheet, for instance. It isn't necessary in order to analyze the game, however, as it will be obvious to anyone reading the record how the board was set up (King's pawn can't start from d7 in a normal setup) and how the moves progressed.

If this matters at all, it's due to an artificial requirement specific to tournament play -- which is to say, it isn't really about chess, as such; rather, it's about chess tournaments.

You surely deserve to get several answers this time!

The question shows the only way of misplacing the pieces on the chessboard where the rules let the game be played through. It is so because the rotation shown preserves square colors, and square colors are deemed relevant.

In the position shown in the question, there's a white queen on d1. That d1 square is labelled as e8, but that doesn't make it e8 as far as the rules go. It is d1 because it's at the side of the table where the white player sits and because it is the fourth file counting from their left hand side.

An arbiter who observes that a player is using a notation system other than the algebraic (e.g., a rotated algebraic system in which the d1 square is consistently notated as e8) should warn the player of the requirement to call the squares the way the rules call them, rather than the way the rotated chessboard labels them; with the penalty being that the non-standard notation cannot be used as evidence if the state of the game ends up disputed later. Other than that, the arbiter will let the players go on playing with with the chessboard rotated by 180 degrees.

If there's no requirement to write down moves (e.g., in a blitz tournament), then it's unlikely that anyone would even notice that the labels are off, and if they did, nothing would follow from the fact.

10
What is this game, played with chess board and pieces, but with totally different rules?