Thud: Can a dwarf be hurled over a troll onto another troll?

Thud is a game described in Terry Pratchett's novel, Thud!

I'm currently working on a browser-based version of the game and it's raised an interesting question about the rules which I'm not sure I can answer from the description.

Here's how the instructions describe the Dwarves' "hurl" move:

Hurl: anywhere there is a straight (orthogonal or diagonal) line of adjacent dwarfs on the board, they may hurl the front dwarf in the direction continuing the line, as long as the space between the lead dwarf and the troll is less than the number of dwarfs in the line. This is different from a normal move in that the dwarf is permitted to land on a square containing a troll, in which case the troll is removed from the board and the dwarf takes his place. This may only be done if the endmost dwarf can land on a troll by moving in the direction of the line at most as many spaces as there are dwarfs in the line. Since a single dwarf is a line of one in any direction, a dwarf may always move one space to capture a troll on an immediately adjacent square.

So here's the scenario I'm a little uncertain of. There's a line of dwarves (in blue) which puts two trolls (in green) in the firing line: 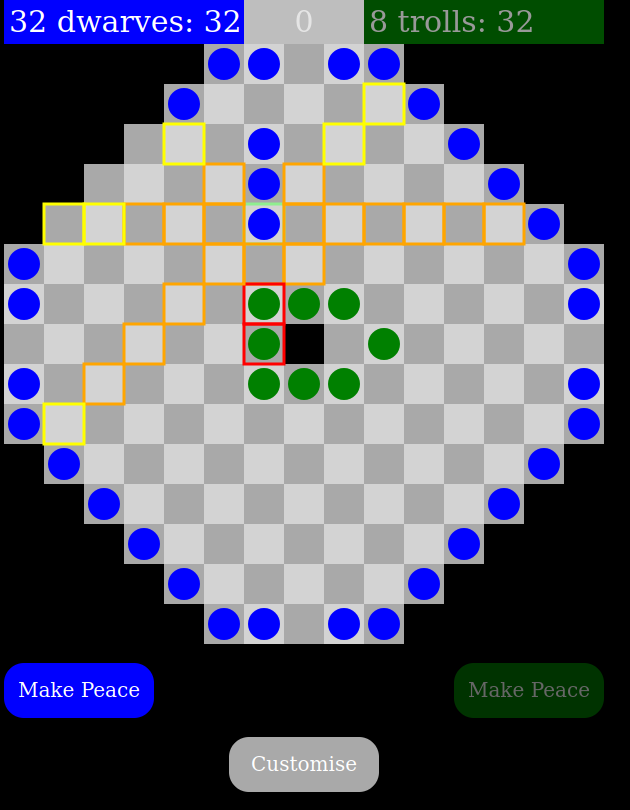 What I'm not sure of from the instructions is this: Should it be possible to shove a dwarf over a troll onto another troll?

This also raises another, much more obscure question:

Should it be possible for a dwarf to be hurled over another dwarf, onto a troll? 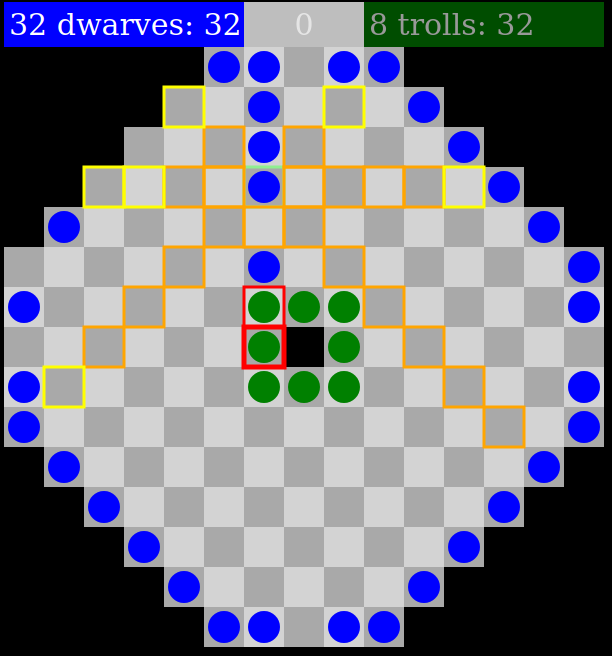 Should this dwarf be able to be hurled over the other dwarf in order to reach the troll?

This one's so obscure I won't bother building a scenario for it:

Should it be possible for a dwarf to be hurled over the Thudstone™️ to land on a Troll?

It feels like the answer to all three of these questions should be the same, either a dwarf is hurled horizontally, or in a ballistic arc over the top of other objects.

Edit: This may ore may not be a clue, but only the dwarf at the end of a line can be hurled. e.g. The second dwarf in a line of 4 can't be hurled 3 spaces forward over the dwarf on the end.

This might be an argument for the horizontal hurl.

No, you can't toss a dwarf through another dwarf, a troll, or the Thudstone.

Your own quote states:

This may only be done if the endmost dwarf can land on a troll by moving in the direction of the line at most as many spaces as there are dwarfs in the line.

So a hurl is only valid to spaces to which a dwarf can move, and the rules for moving state:

but not onto or through any other piece, whether Thudstone, dwarf, or troll

Not the answer you're looking for? Browse other questions tagged thud or ask your own question.