Zombicide: How many zombies spawn in a double/triple wide zone? and How many actions does it take to cross this zone?

Zombicide: Green Horde has several rules that apply to zones. This includes survivor/player movement, zombie/enemy movement, and zombie/enemy spawns. It also specifies that these zones are clearly distinguished by separators. However there are several zones that are not separated that look like large double and triple wide zones. How are these zones meant to be treated for movement and spawning?

How many zombies spawn in a double/triple wide zone? and How many actions does it take to cross this zone?

Take for example the core rulebook Quest 4 on page 44. Tile 12R contains 2 doublewide zones. Say I open the door to the left (see screenshot). The rules say each zone spawns zombies as soon as the door is opened. Will the double wide zone spawn 2 sets of zombies for a total of 4 spawn cards (Blue droplets)? or is it 1 zone for a total of 3 spawn pulls (red droplets)? The same question applies to movement and does not necessarily have to be the same answer. Perhaps only 1 zombie group spawns but a player would have to take 2 actions to cross the zone? 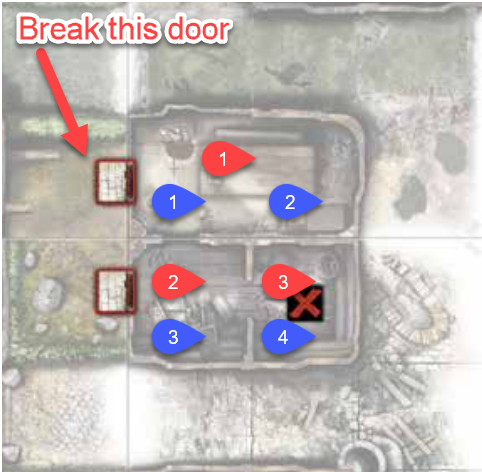 Their is no division specified so the zones should be 1 movement and 1 spawn. As evidence I reference core rulebook Page 9 that highlights the double-wide zone as a single zone and page 21 that specifies movement is generally 1 zone per action. Also Quest 6 (page 46) an objective in the double-wide zone is centered. Despite this evidence one of the other players disagrees with me. Is their anything more specific in the rulebooks to clarify how these larger zones are handled? Any version of Zombicide would probably be sufficient. I have only read the Green Horde instructions.

Note: I am unable to add a zombicide-green-horde tag as I am new to this exchange community and don't have enough reputation yet but I think the rules should be applicable to all versions.

I think Ken Herbert has a good explanation on what constitutes a "Zone" in Zombiecide. From his answer, page 5 of the core rulebook suggests:

Inside a building, a Zone is a room.

With that in mind, the red droplets in your image would be the correct spawns. The top area, while double-wide, is still just 1 big room. The bottom area is separated into 2 rooms by dividing walls which would make these 2 separate spawns.

Not the answer you're looking for? Browse other questions tagged zombicide zombicide-green-horde .

2
How large are the zones?

1
Spawn zones: the tile or the zone?