What's this old board game set in a village with yellow and red roads?

No pieces, or other information is available concerning this game board. What is this board game? 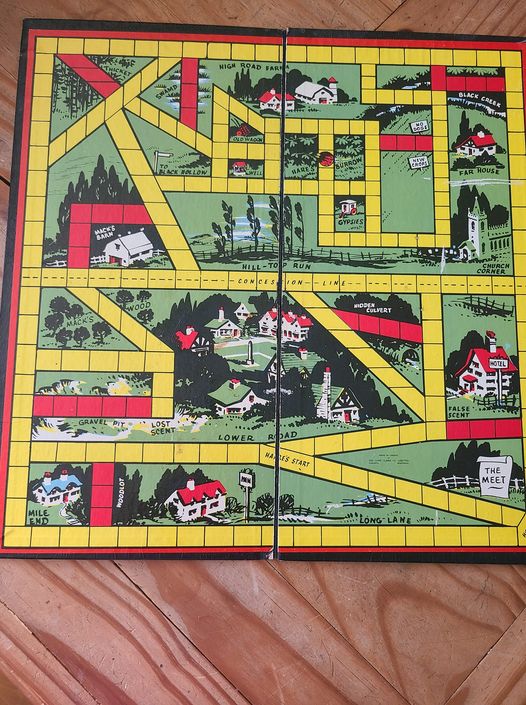 I am pretty convinced that this is an edition of the Parker Bros. game "Fox and Hounds" from 1948. Obviously, this one would have had a different name, since there is a hare instead of a fox.

However, I can't figure out what the name of your game might have been, and I haven't been able to find a matching board.

Still, hopefully this is a helpful clue.

Here is an image of the game board for Fox and Hounds: 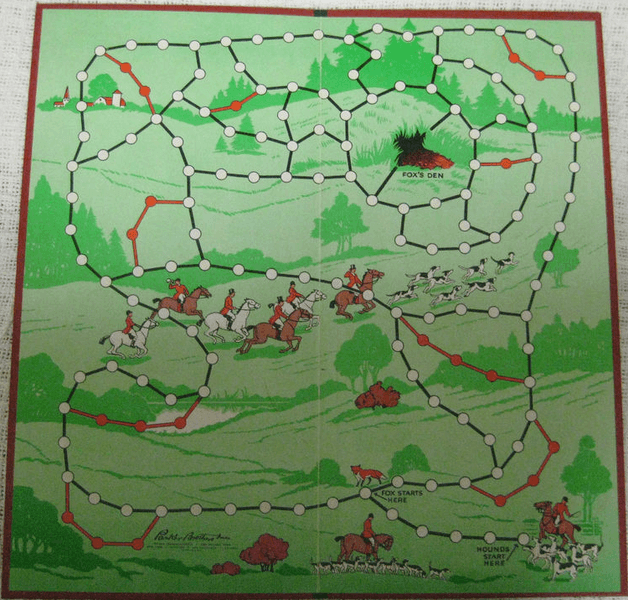 It's a different board but it has the same red paths.

The rules are very simple. The hare is trying to reach the Hare's Burrow by exact count and the hounds are trying to land on the hare. Each player rolls a die on their turn and moves the corresponding number of spaces. Switching direction during a turn is not allowed. Only the hare is allowed to move along the red paths and, if on a red path, must move off it if possible.

The sign near the top of the board looks like it says "new cards", so maybe your version doesn't use dice?

4
What's this 3D game?
9
Help identifying old board game
1
Identify old Lithuanian board game
5
Identify this game - strange yellow plastic piece
6
Please identify this game - 4x4 diagonal squares, 4 red and 4 blue pieces - nice wooden board
5
What is this Old French Game board with 10x10 squares and dark and light circular pieces?
13
What's this board game with an old radio and some country flags on it?
8
What's this game depicting an old viking in the middle of a big character sheet with futhark script?
6
Anyone know a game with yellow and blue ducks?