What is the best 18xx game to teach someone? [closed]

Ask Question
Asked 11 years, 3 months ago
Active 10 years, 8 months ago
Viewed 4k times
8
As it currently stands, this question is not a good fit for our Q&A format. We expect answers to be supported by facts, references, or expertise, but this question will likely solicit debate, arguments, polling, or extended discussion. If you feel that this question can be improved and possibly reopened, visit the help center for guidance.
Closed 10 years ago.

There are several 18xx games easily available, maybe 8 or so that have mass produced and a few dozen kits that can be purchased or downloaded.

I love 18xx games, but I've found that not everyone I teach shares my enthusiasm. I understand that some games will never appeal to certain folks but I think that part of the problem is the relative complexity of 18xx games. As a group, they have several different mechanics that have to be learned for a new player to play a credible game.

With this question I'm looking for recommendations for the best 18xx game to teach a new player. The game should have the best chance of hooking new players and getting them to want to explore the genre deeper. I think that the best game would have:

It contains the basics of the game:

If you want a simpler game, you can ignore the private companies. Lower the starting money a bit if you like. I have played with and without privates and it seems to make no significant changes to the game.

If the stock market is too confusing, you can ignore that too. Just have one company per player. It's possibly wise to reduce the number of trains, else you never get rid of those 2 trains.

Most players run away from these, so no need to get a more complex game.

All 18xx have their own focus. I like 1856, because you can get away with mismanagement and get rewarded in the end (just like in real life).

Classic 1830 with the addition of the Reading variant. This variant can be downloaded from Boardgame Geek. It adds a new company, the Reading, which competes with the Pennsy. More importantly it adds a delayed rust rule for trains which gives new players some extra protection against being choked out early.

Additionally there is rumor that the reprint may include one or more of the variants. 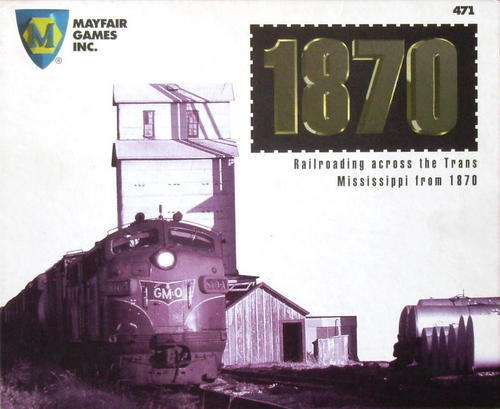 There is one major downside for beginners though

I got introduced to 18xx through 1825 (specifically Unit 1, then Units 2 and 3) and trying more 183x inspired variants later, like 1856, I've value the introduction I got. The more constrained board and the shorter playing time was a real advantage. Also, the game felt a bit more forgiving of mistakes. One of the big disadvantages to the 1825 series, though, is their relative rarity -- if you don't already own a copy, you'll probably find it quite difficult to get one: they were assembled by Tresham in relatively small numbers, and the run of readily available copies has long since sold out, I believe.

Years later, I played Poseidon, a game I believe is specifically intended as an introduction to 18xx-style games. As with Tresham's 1825 units, the game play is shorter, and the field somewhat more constrained than in most 1830-inspired games; for better, or worse, Poseidon "re-imagines" 18xx to a certain extent, using different theme and terminology. But I do believe that it's a good gateway to 18xx games, proper -- for players comfortable with the playing time and difficulty in games like Le Havre or Age Of Steam or Brass, Poseidon can easily act as an enjoyable bridge to full-blown 18xx. Poseidon was also produced by a game studio (Lookout Games) and so is probably much easier to find than 1825 units at this point.

Finally, there are some 18xx games that I believe were rather specifically intended as means to introduce people to games; you can find entries for the "So, you're thinking about giving 18xx a try?" list at boardgamegeek: 18EU and Steam Over Holland (and Poseidon). But also, you'll find a lot of commentary and comments on the pros and cons of introducing newbies to 18xx with a wider variety of games not often thought of as starting points.

Not the answer you're looking for? Browse other questions tagged recommendations teaching 18xx or ask your own question.

6
18xx Companies able to buy other companies, what will be the impact
33
How should I approach teaching Magic:The Gathering to a new player?
17
How can I teach other people game rules?
10
Simplest bidding system for introduction into bridge