Magic The Gathering - Damnable Pact timing with Psychosis Crawler - what triggers when?

In a 4 player commander game, everyone has 7 life except for Player A who has 9 life. They have a Psychosis Crawler on the battlefield. Player B casts Damnable Pact on player A, where X is 9. Player A must draw 9 cards and lose 9 life.

How does Damnable Pact resolve? Specifically, when does player A draw cards, and when do they lose the life? Do they win the game? 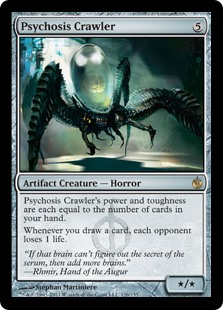 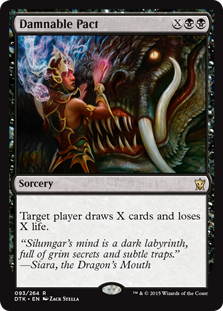 Damnable Pact is a single spell, so it all resolves together. The first thing that happens here is that player A draws 9 cards and loses 9 life. For each card they draw, Psychosis Crawler's second ability triggers, but it doesn't do anything yet. Once Damnable Pact finishes resolving, state-based actions are evaluated, and player A loses because they have 0 life, and the triggered abilities never even go on the stack because their controller is out of the game.

The key rules for this are a few in the triggered abilities section, and in the state-based actions section, and one in the multiplayer section:

603.3. Once an ability has triggered, its controller puts it on the stack as an object that’s not a card the next time a player would receive priority. See rule 117, “Timing and Priority.” The ability becomes the topmost object on the stack. It has the text of the ability that created it, and no other characteristics. It remains on the stack until it’s countered, it resolves, a rule causes it to be removed from the stack, or an effect moves it elsewhere.

Player A loses the game, and the game continues on.

The game continues on without player A, and everyone else at 7 life.

7
How does Infinite Reflection work with Commander and commander damage?
5
Divination and Psychosis Crawler
8
What happens when both players run out of cards with Gideon of the Trials and an emblem in play?
2
Does Psychosis Crawler die in the middle of Days Undoing?
0
Magic the gathering number of cards in a hand
21
What happens if multiple triggers on the stack would cause both players to drop to 0 life if fully resolved?
1
What is the correct timing to play removal in order to stop a Niv-Mizzet + Curiosity combo?
2
Weird Lich and Laboratory Maniac situation, who wins?