In what year did Parker Brothers correct the rent for Marvin Gardens?

At first, the rent on the title deed for Marvin Gardens was set at $22. It was later corrected to $24.

In the edition of what year did Parker Brothers introduce this new rent? 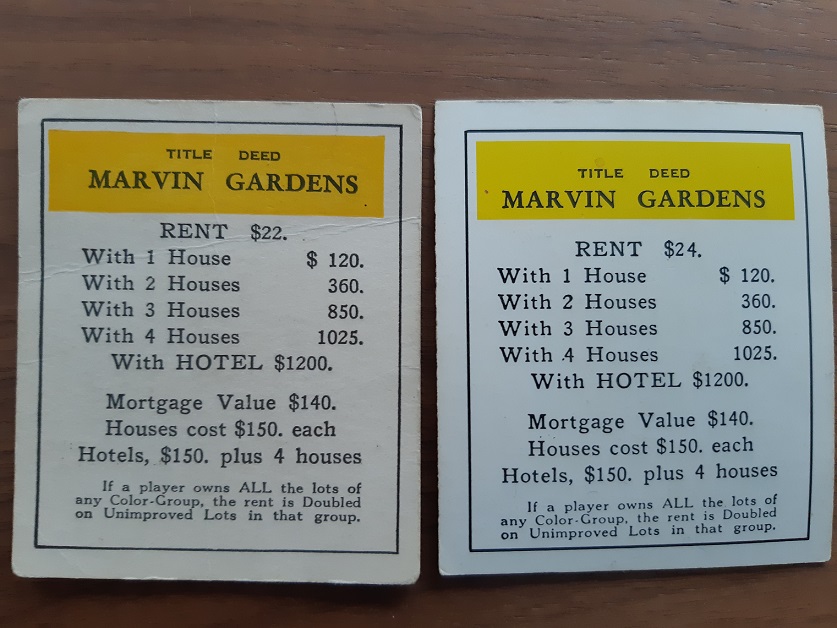 From the Monopoly Wiki:

There are some special facts about this one. In the UK Version, rent is only ₤22, and ₤44 for a monopoly. It was $22 ($44 for a monopoly) in the original Atlantic City version until Parker Brothers changed it in the 1950s. Before then, it was the only exception to the pattern of the third property (second in the case of the browns/purples and dark blues) in a color group having the most expensive set of rents.

Will try to narrow it down but this is a good starting point.

The site "World of Monopoply" has an extensive history of the different editions of the game, based on collecting and cataloguing different sets.

The next change that occurred to the Title Deeds was in 1951/52. At this time the look of the cards didn't change, but an almost 20 year old error was corrected. The rent on Marvin Gardens was changed from $22 to $24. Marvin Gardens should have been $24 all along, but a typo by Darrow made it into the Parker Brothers sets where it remained for almost 2 decades.

The mistake seems to have spread to other editions as well, and persisted for longer. The equivalent property in the standard UK edition is Piccadilly, and the site lists an edition dated to 1986 as having the incorrect price:

The rent of the unimproved Piccadilly is the same as of both other streets, only £22.

It's not clear when this was corrected, but an Australian edition from 1996 has the note:

The rent on Bourke Street for unbuilt property is $24 now.

Hasbro acquired Parker Brothers in 1991, and re-launched a lot of the international editions (which were previously published under license by various different firms), so it's likely that they rolled out the corrected rent then.

13
What if I forget to pay rent?
33
In Monopoly, Is it OK for a third party to make a trade with a player who is about to lose?
6
1932 Finance board game
6
In Monopoly, Can I mortgage the property I land on in order raise sufficient funds for its purchase?
12
Vintage Monopoly Game: What Year is it?
9
Monopoly Stock Exchange add-on: How does the add-on change the probability of landing on the properties?
0
What happens when a player pays more than what they owe for rent?
4
Building Houses Evenly in Monopoly
3
If you buy a house at "auction," can you put it on any property?
7
In monopoly, if a player owns all of a set of properties but one of the properties is mortgaged, is the rent still doubled for the other properties?