In the game of Battleship what are the best strategies to

Please also provide an explanation for your strategies. TIA

To shoot, do the following:

For example, with N = 3, you are trying to sweep a pattern like this:

This is the sparsest pattern (fewest number of total guesses) that is guaranteed to find all of their ships.

Given this, the best thing you can do when placing your ships is at random such that no two ships are touching (some variants of Battleship have this prohibited in the rules, but even if it is allowed, you shouldn't do it). The problem with ships touching each other is that when the opponent hits one of your ships, they will be checking around that hit to find the rest of the ship, and thus may find your abutting ship by accident.

Other advice for ship placement is only helpful if the opponent is searching sub-optimally, but here it is nonetheless:

A strong algorithm for a slightly different set of rules:

Ships Can be placed next to each other.

DataGenetics wrote a fun piece about solving Battleship a few years ago. If their algorithm isn't optimal, it's at least extremely close. The author combined the concept of parity with probability density functions. That is, you only have to fire at every i'th square of the grid, where i depends on the size of the smallest ship. And as the number of shots increases, some spots are more likely to contain ships than others depending on how many rotation and translation-configurations of a certain ship is possible considering the space that is left.

I think it would be interesting to attempt to optimize fleet layout against their strategy. Maybe it's possible to lay out the ships in such a way that the probability density function gives the least amount of information for the maximum amount of rounds?

calculate the most probably location to fire at next based on a superposition of all possible locations the enemy ships could be in.

The following graph display number of turns distribution, we can see that in most games, the New algorithm sunk the opponent's ships in 30 to 60 turns. 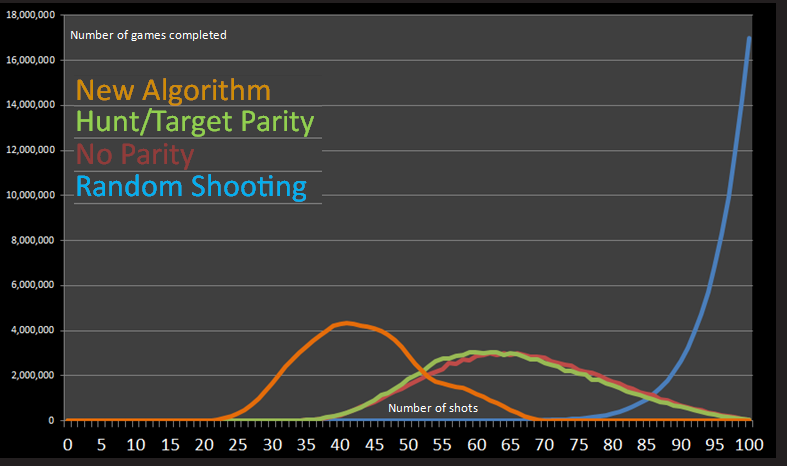 I would say the optimal strategy for shooting is aiming to destroy the largest ships first in order to cover as much as the board as fast as possible. I would suggest starting out with a gap of 4 and move down as you sink the larger ships.

I suggest this for several reasons.

Note: I am not suggesting where to start on the board, just the pattern to follow.

How to Win at battleships

There are two repeating phases in the game: Hunt and Kill.

In the Hunt phase you are trying to find ships. Since all ships occupy at least two contiguous squares, you only need to fire at every other square. If it was a checkerboard, you'd only fire on the red squares and not black, for example. Once you score a hit, go to the kill phase.

Kill phase obviously results in trying to figure out which way the ship points and where the ends are. In this case you fire immediately adjacent to the hit location. The rest you can figure out.

You can save some time by knowing which ships are still out there. If you have found the destroyer, you don't need to sample every other square, but rather every third, as the smallest ship will span at least three adjacent squares.

I'd start randomly firing off shots, but don't hunt in adjacent squares. Then you can fill in holes later after sinking a few ships and knowing which ones are still out there.

TL,DR; Every other square to find ships, then sink them.

Not the answer you're looking for? Browse other questions tagged battleship .

7
How can I teach kids how to play Battleship?
1
1935 Paul Heath's New Battleship Game