What does "Rarity: Basic land" mean?

For example, in Woodland Chasm's Gatherer page, you can see the following: 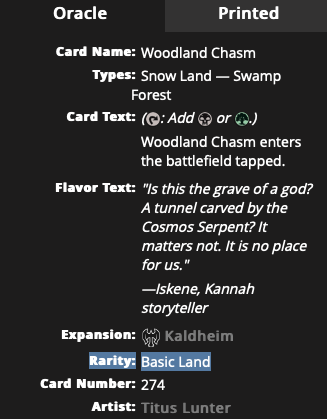 I am pretty sure Woodland Chasm is not a basic land, for it is not among its types, but what that "rarity" tag means then? Why not just put "common"?

Basic lands are a special case in a number of ways. While they're given the common set symbol, their rarity doesn't exactly correspond to “common” because of the way they're included in draft boosters: they almost always have a dedicated slot at the back of the booster, and not mixed in with other commons.

Woodland Chasm isn't a basic land, but it was included in the basic land slot for Kaldheim—hence it gets basic land's rarity, apparently!

They even have a unique rarity mark in the lower left of the card. If you look at the bottom left of cards since M15, they'll have a letter in the lower left explaining their rarity: M, R, U, or C—for Mythic, Rare, Uncommon, or Common respectively.

Basic lands meanwhile just have an L for Land:

Some sites like Scryfall opt to just call it “close enough” and file them as common, but Gatherer has opted to be more specific.

They have a special rarity other than common because they don't appear in the same places/frequency as regular commons in random packs like boosters. Instead, they appear as often as basic lands. From the Wizards website:

As always, Kaldheim comes in Draft Boosters. These are by far the best way to play any Limited format. This is the classic Magic booster, and the contents are pretty straightforward:

Not the answer you're looking for? Browse other questions tagged magic-the-gathering card-rarity .

18
Why do cards have different rarity levels in Magic: The Gathering?
5
How exactly does Xenograft work, and not work?
11
Why play Land Grant?
7
When a land is granted a basic land type, what effects does that have?
7
Mystery cards in Magic 2015 card list
0
tap and sacrificing an already tapped land to get it's ability
1
What happens to other land types (e.g. Legendary/Artifact) when some effects change the basic land types?
4
Dryad of the Ilysian Grove and Imprisoned in the moon
5
MTG Layer System - Does adding a basic land type to a land grant the mana ability at layer 4 or layer 6?